The results are in after 48 hours re the frog on the blog balloting. An independent accounting firm was not necessary. I’ve got ample fingers to do the job:

9 votes were cast in favor of Gop being a frog of color:

5 voters, including 1 by my wife, pulled the lever for black and white Gop.

2 voters had other stuff to do and didn’t care. One of those was me.

I gotta tell you, I am pretty pleased with the turnout. Because, have you noticed, it all comes down to the numbers nowadays.

Here’s some text from a Buy TWITTER FOLLOWERS SITE: Buying Twitter Followers is a shortcut. It’s a way to increase your Twitter Account’s social credibility and can give your business, career a great kick-start, or even an ego boost. While it’s not really socially acceptable, it’s well known that millions of people around the world have bought them.

Wow. I knew people bought Book Reviews. That was in the news awhile back when the New York Times wrote a good piece called, THE BEST BOOK REVIEWS MONEY CAN BUY  in August 2012.

So, I suppose I could have found a site that would have voted on my blog and charged me? But where is the fun in that?

The Gop Makeover post got five WordPress LIKES. Two of the people I actually know. Another is called Fiction Fan. Imagine the money FICTION FAN could make as an independent, freelance LIKER with a name like that? Fiction Fan, if you are ever in Bangkok stop in at the CheckInn99 on a Sunday and I’ll buy you a drink. Not because you left a LIKE. Just because, I like your name.

Blogs and social media have their up-side and their down-side. What I think we have lost is, authenticity. On this blog I try and be authentic. I know I fail often but I’ll always strive to be authentic. Henry Miller, the American author whom inspired this blog, like him or not, was authentic. Malcolm Gault-Williams, the first author I ever interviewed at Thailand Footprint, whom has a lifelong project of penning the Legendary Surfer series, is authentic. 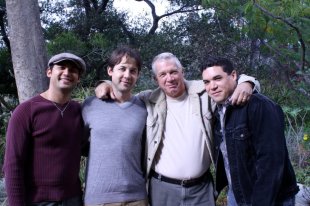 Melissa Ray, the three time Muay Ying Champion, whom (not coincidentally) also holds the single day record of 240 views at Thailand Footprint and the all time views record of 500+ for her post A SENSE OF WHERE YOU ARE  is authentic. I’d bet the farm she doesn’t buy Followers. She has followers. She doesn’t buy LIKES, Champions are LIKED. 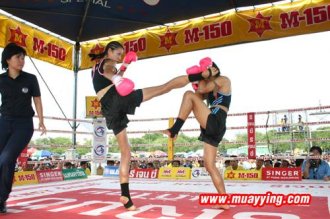 Professional Muay Ying, Melissa Ray in a 5 Round Match

And Colin Cotterill the creative author of the Dr. Siri series and Jimm Juree Crime Reporter series and the cartoonist that drew, Gop the frog in the coconut shell, is authentic. Colin doesn’t even have a Facebook or Twitter account. He may not even have a phone. Well, he has a phone. He’s just smart enough not to give out his number to me.

Colin Cotterill, the author of AGING DISGRACEFULLY, among many others, must figure out alternative creative ways of looking professional and getting his ego boosts down in Maprao. 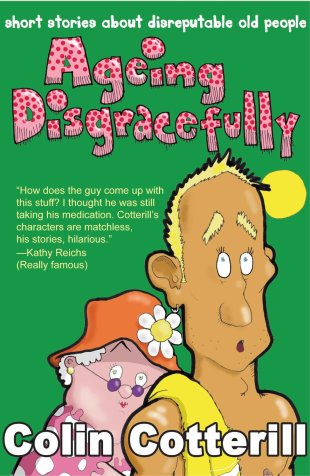 But back to Gop and the polls. For the fourteen people (besides my wife and me) whom took the time to cast a vote. Thank-you. Especially my old artist friend, Doug, whom I may have asked to vote. He did. Hey, I’m not perfect. To the five people that left a WordPress LIKE on the blog, thanks also.

We’re going to put the colored Gop on the right sidebar and leave the black & white one in upper left corner. Everybody wins.

I’ll end this post with a quote by another authentic individual, before the days of blogging and social media. He was one of my favorite comedians when I was a kid and also a pretty good artist:

Live by this credo: have a little laugh at life and look around you for happiness instead of sadness. – Red Skelton