As a born and raised California guy my exposure to ice hockey has been limited but often memorable. This was the case last Sunday night in Bangkok when I met Greg Beatty, a Canadian passport holder and, as the odds would have it, a fan and player of the most popular sport of my northern neighbors, along with American photographer Eric Nelson who hails from St Louis, Missouri originally. Eric once shot photographs of a St Louis Blues hockey game back when people still used Kodak film. Our Mission: to watch and photograph a Siam Hockey League game or two.

The year is 2020 – the year from hell – so what better way to spend a Sunday night in the City of Angels than to chill in the cool of the Imperial World Olympic sized ice rink, located on the top floor of Imperial World Samrong 999 Sukhumvit Rd, Samrong Nuea, Samut Prakan 10270, Thailand .

My very first ice hockey game was in 1967 at the Oakland Alameda Coliseum to watch the Bay Area’s first ever NHL team, the California Seals in their debut season. The score was 3-0. The Seals won. It would have been more fun had I actually seen any of the goals being scored. There seemed to be a conspiracy-like theme going on that night: every time I reached down for some popcorn the red light fired on. Damn! This wasn’t basketball, that I was sure of. It’s a fast paced sport. But it was fun to watch, with lots of rough and tumble moments and learning new words like high-sticking, checking, biscuit, sin-bin, and light the lamp.

It was 10 full years before I had my next exposure to ice hockey. I was working a summer job at the Lake Placid Lodge in upstate New York. There on the campus of Lake Placid High School was a classic old ice skating rink, which I learned at the time was originally constructed as part of the 1932 Winter Olympics. Nightly pickup ice hockey games occurred there, something I had never seen in person before and never have seen again. We live in a climate-controlled bubble in California. I went three times that summer to watch those informal games, with no referees, no scoreboard, and thankfully no lamps to light. It wasn’t shirts vs skins but it was close enough. While the Lake Placid Arena could hold several thousand people, there were no more than twenty people in the stands those nights. It too was fun to watch. It became more fun a few years later as I watched the Miracle on Ice Olympic ice hockey game between the USA and the dreaded USSR in 1980 played at that same ice rink, which I viewed at C.B. Hannegan’s Irish Bar located in Los Gatos, California. To this day, Mike Eruziane, Gordie Howe, Bobby Orr, and Wayne Gretzky are pretty much the litany of hockey players I can recite off the top of my head.

Outside of a chance sighting of The Great One at a San Francisco Giants baseball game in the mid 1980s as he sat with his wife, Janet Jones, this is the extent of my ice hockey history, until November 15th, 2020 in Bangkok. 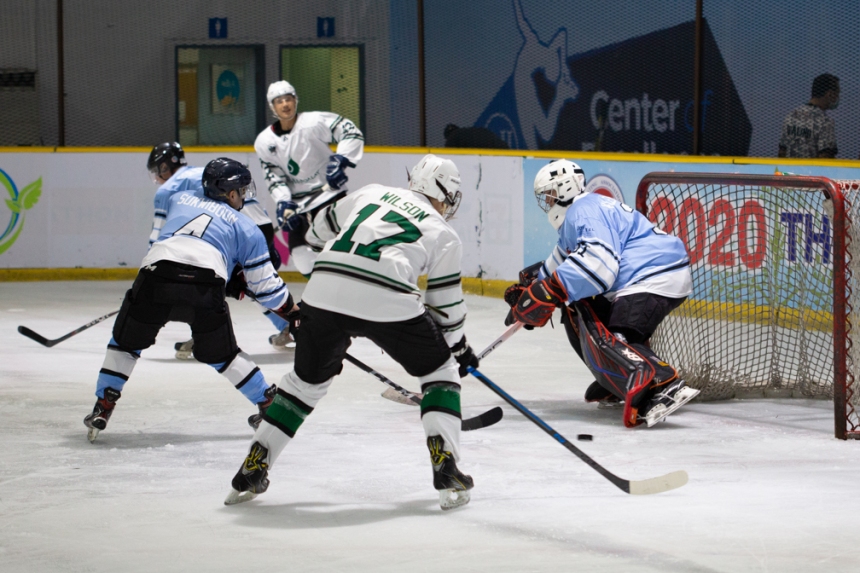 Sunday Night Siam Hockey League in Bangkok, Thailand in the year of 2020 – Photo by Eric Nelson

Ice hockey in Bangkok has a hardy and persistent existence. It has been around since at least 1995 in one incarnation or another. As one ice rink would have the plug pulled on it, for one reason or another, the players would always find a new home to skate on. There have now been a few past homes but the pucks and players seem to have secured a good one at Imperial World Samrong. Most every Sunday during the winter season and then some, there are two adult league games that have three 17 minute periods, with stoppage time only in the last 2 minutes. The action packed games run about one hour. I arrived early, at 8:30 pm and there was a Thai youth league going on, although it was pretty clear to me that because of equipment costs this was a league of upper middle class and up Thais. It’s a much different sport than the inner-city and rural game of basketball where only a ball, some asphalt, and 2 hoops are needed. 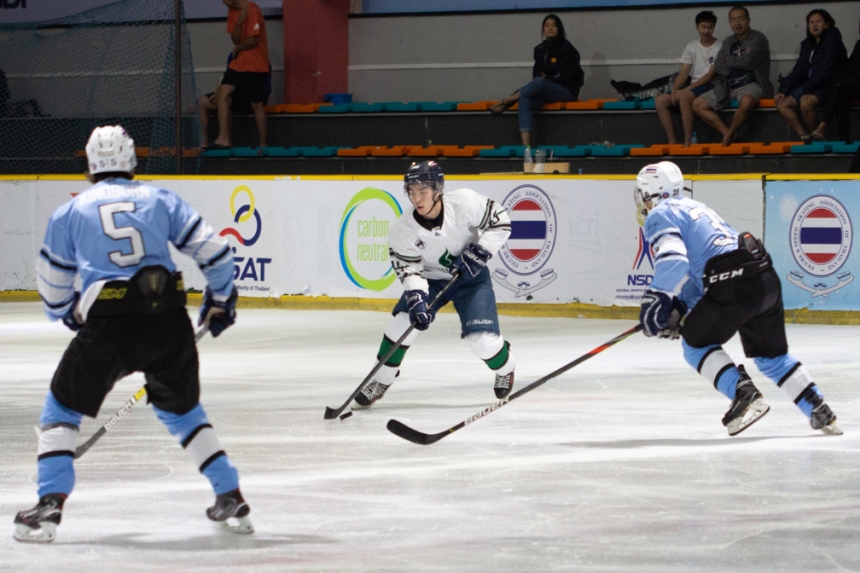 Scotty Murray, AKA Scotty Hockey is 60 years old and still making great plays and scoring occasionally. Scotty deserves the most credit for the success of ice hockey in Bangkok; he has been instrumental in developing the league. The league is called the SHL (Siam Hockey League) which is composed of four teams. They are a mixture of Thai and international players. There are two games every Sunday starting at 9:00 p.m. 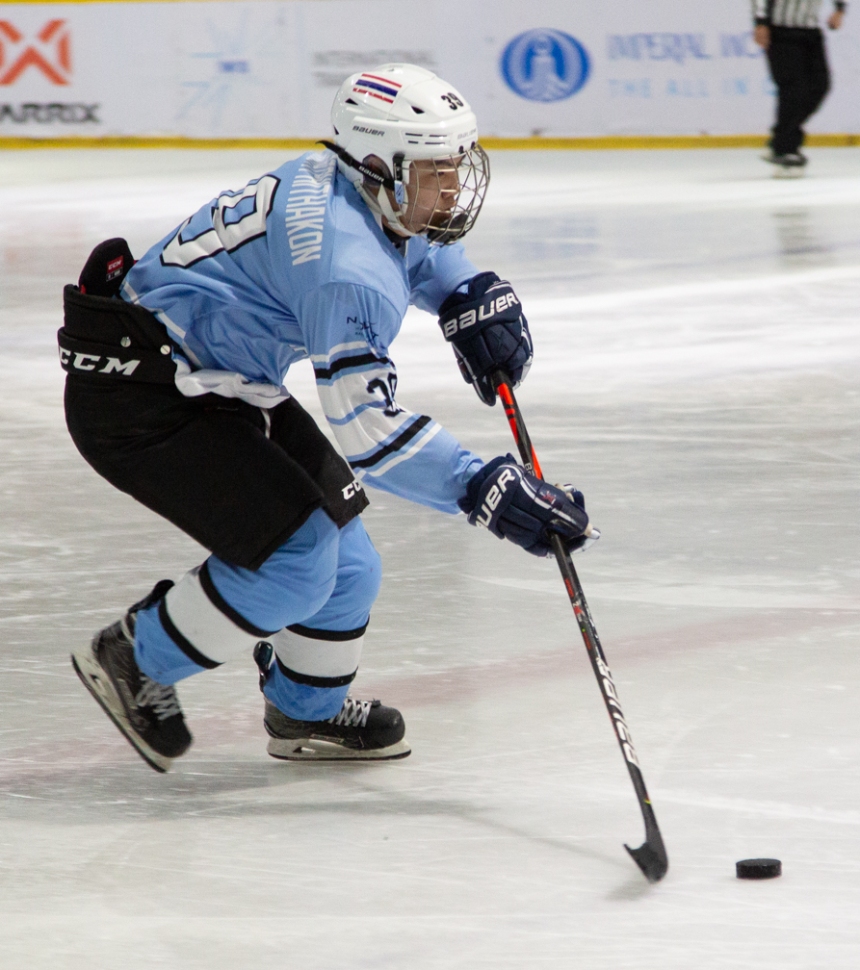 The Thai and flying farangs hockey players were a fit looking lot to be sure. On any given Sunday you may see a retired FBI guy, a well known comedian, a contracts lawyer, and NHL family members out on the ice. Last Sunday I met players or fans from Russia, Finland, Thailand, the USA, and of course Canada. The level of skating ability to my untrained eye seemed top shelf and, no, I am not talking about the goal area, I just learned the other usage of that term last Sunday. The goal-keeping ability is also impressive. The first game was tied 2-2 in the third period and ended dramatically in the final 15 seconds with the undefeated team in blue prevailing at the wire. 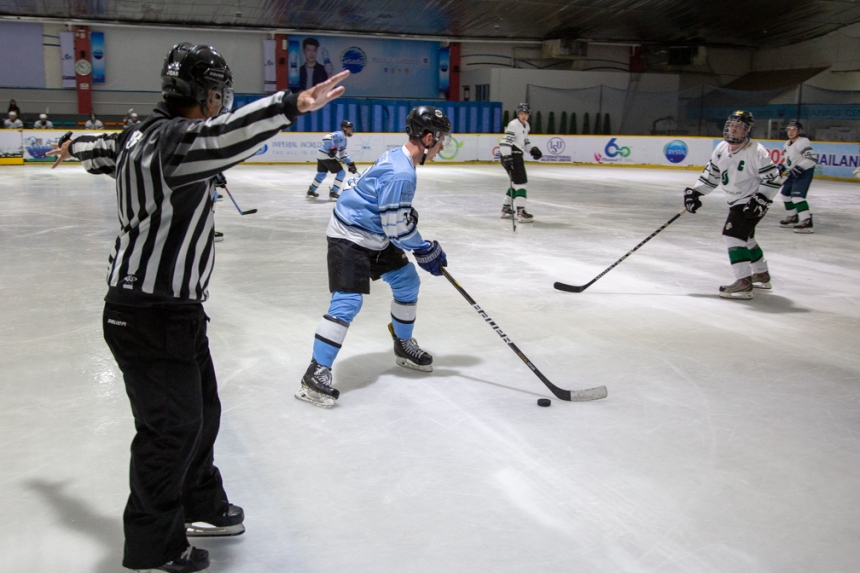 Keeping it clean on the ice – Photo by Eric Nelson

If you are looking for something new and different to do in Bangkok, Thailand on a Sunday night you cannot go wrong with checking out the Sunday night SHL at Imperial World Samrong. Spoiler alert: checking and high-sticking are not allowed and I didn’t see anyone end up in the penalty-box, but I hardly noticed. The referees do earn whatever remuneration they get. It is refreshing to see that in places other than Washington D.C., good sportsmanship, and good abilities still exist in the year 2020. There is a tournament going on today all day, Sunday November 22, if you are in the neighborhood. Otherwise Sunday nights at Imperial Samrong is the place to be to witness your own minor miracle on ice in Bangkok, Thailand. 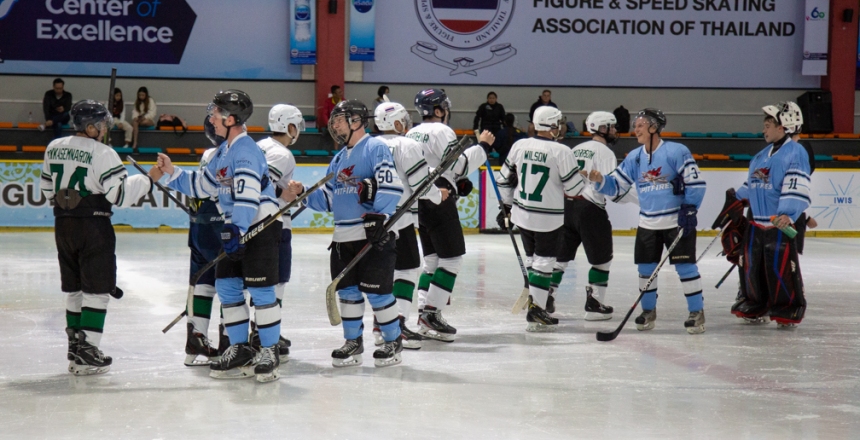 Friends before and after the game. Final score 3-2 Blue team remains undefeated – Photo by Eric Nelson 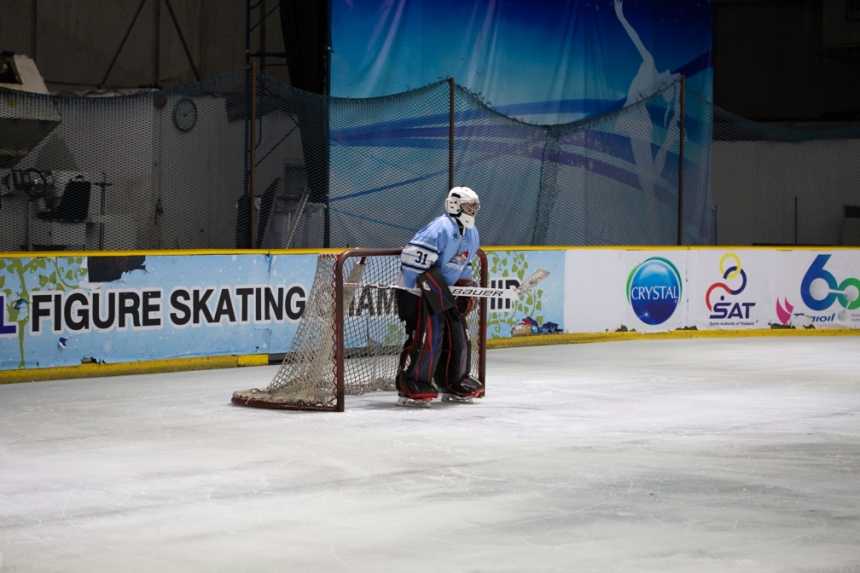 “Only a goalie can appreciate what a goalie goes through”.  Jacques Plante – Photo by Eric Nelson 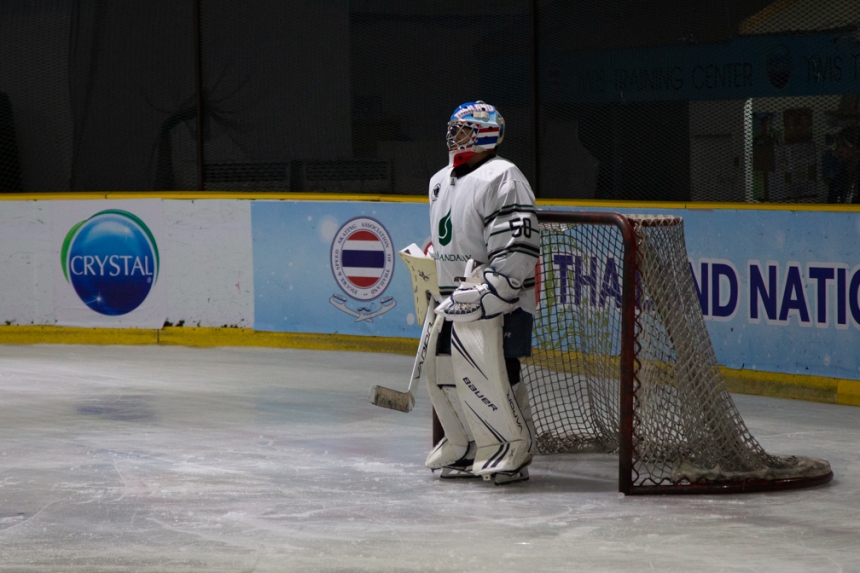 “For a goalkeeper, there is no hiding place.” Brad Friedel

Scotty Murray, AKA Scotty Hockey is 60 years old and still making great plays and scoring occasionally. Scotty deserves the most credit for the success of ice hockey in Bangkok; he has been instrumental in developing the league. The league is called the SHL (Siam Hockey League) which is composed of four teams. They are a mixture of Thai and international players.