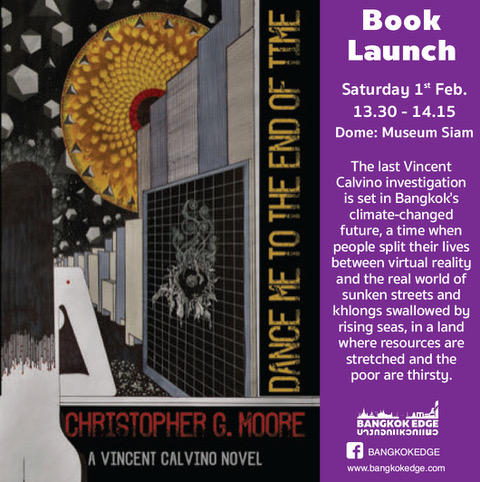 This Saturday, February 1, 2020 in the Year of the Rat there will be a book launch for DANCE ME TO THE END OF TIME by Christopher G. Moore as part of the Bangkok Edge Festival where you can join the author for what is sure to be an entertaining session among many Edge sessions for the curious.

Through a quirk in the Amazon delivery system I received my copy early. In time to review it here:

DANCE ME TO THE END OF TIME

Christopher G. Moore gives his readers advance notice that the Vincent Calvino Novel #17 will be the last in the series about Calvino’s world, which began with Spirit House in 1992. Moore chose to set the series finale after the Great Upheaval in a climate changed Bangkok where water is on everybody’s mind. A risky move by Moore but one that pays off like a bell-ringing tourist straight out of Heathrow. As the female mega-cyber-celebrity character, Emily, says, “The worst thing anyone can say at your funeral is that you played it safe. Fuck that.” Moore is a lifelong adventurer and a cultural-detective; he takes his readers along with him on Vinny’s last wild paper case.

Early on in DANCE ME TO THE END OF TIME a metaphor is given about an aging-runner. It makes the reader think about what you might prefer not to think about, but are wiser for doing so. Moore keeps up this rabbit’s pace throughout the 321 page tale told, uncharacteristically, in the first person by our man in Bangkok, Vinny, the former disbarred lawyer from New York City. It’s a Bangkok where age 50 is the new 23 but that’s not all it’s cracked up to be. There’s a lot going on in this classic-noir investigation, which includes a perfect balance of Old School past and a super-technology laden future. The people’s lives in the City of Angels are not-so-balanced. Bangkok has changed – why wouldn’t it? It has Big Ben – the original, not a knockoff, a gigantic ferris-wheel (protected by a sea-wall) that dwarf’s London’s to placate everyone, a Chinese run AI named Henrietta with a sense of humor, ostensibly running the show, and countless displaced climate refugees living in Lumpini Park, among other places, where there aren’t any sinkholes.

Survival of the bittest comes into play when a Chinese scientist, Dr Wen, working on genetically modified mosquitoes is murdered the old fashioned way – with an AK-47. Vinny, meanwhile, has been retained, as he often is, to find someone not particularly looking to be found. Colonel Pratt and Ratana are along for a dangerous ferris-wheel ride that creates a false messiah figure and many deaths. Cranky McPhail is smoking spliffs for the faithful and we’re just getting started.

It was Charlie Chaplin who said, “Life is a tragedy when seen in close-up, but a comedy in long-shot.” Never have I laughed-out-loud so often during the reading of a Vincent Calvino Crime novel as I have during DANCE ME TO THE END OF TIME. That may be because I did not have the courage to zoom-in on the various tragedies unfolding in front of my eyes. It may also be that Moore has surrendered to the absurdities of life on this planet rather than bank on being an agent for idealistic change. As he writes in Vinny’s voice on page one, “I’d finished with the drama of tilting at windmills.”

Los Angeles had the Bloods vs the Crips and Bangkok in the future does them one better with the Smarts vs the Religious Guilds – by far one of my favorite parts of the book. And speaking of smart, what a smart novel Christopher G. Moore has crafted in DANCE ME TO THE END OF TIME. It’s not preachy smart; it’s not trigonometry smart, although it wont hurt if you are good at the latter. No, it’s common sense smart; it’s 2+2+2+2=8 smart; it’s funny smart. It’s ecologically smart; it’s scientifically smart. Even the gentle digs at the USA are smartly deserved.

I’d be remiss if I didn’t include Vinny’s love interest, Aom, the leader of the always needed Resistance. Vinny is still Vinny and Moore stays in smart form by sticking with a fade to black scene rather than vie for the Bad Sex in Fiction Award. Go, Vinny, go, but behind closed doors it is. Good call in 2020 or 1992.

DANCE ME TO THE END OF TIME dishes out justice artfully and against all odds, fairly, in the long run. Given the circumstances, a surprisingly satisfying ending to a memorable and historic crime series. The crime of the century is administered punishment after all. Who’d have thunk it? Who will inherit this earth anyway? Read DANCE ME TO THE END OF TIME and find out.

Do I have any quibbles with the book? I do not, but I’ll throw some out there for those who will. I didn’t get every literary reference. I also didn’t care. There were a few words I didn’t know the definitions to. I didn’t stop to look them up. I am not a huge science-fiction fan. I stopped reading The Windup Girl by Paolo Bacigalupi at page 90. I was worried I might not like Calvino #17 before I turned the cover. I got it wrong.

There is another elephant in the room as I do my last book review of a Vincent Calvino Crime Novel. Will I miss Vinny and the gang? I say, no. You can only miss the dead. I’ll continue to use Vincent Calvino the same way I always have, since I first read Comfort Zone in 2001, as a cultural compass and a diving-board to spring into the mysterious future.

Thanks for all the rides, Vincent.

Christopher G. Moore will be at the book launch for DANCE ME TO THE END OF TIME Saturday, February 1, 2020 at the Bangkok Edge Festival

Order DANCE ME TO THE END OF TIME AT AMAZON HERE

DANCE ME TO THE END OF TIME dishes out justice artfully and against all odds, fairly, in the long run. Given the circumstances, a surprisingly satisfying ending to a memorable and historic crime series. The crime of the century is administered punishment after all. Who’d have thunk it? Who will inherit this earth anyway? Read DANCE ME TO THE END OF TIME and find out.