A little over two weeks ago I got a text message from the effervescent proprietor of Checkinn99, Chris Catto-Smith asking me if an upcoming Friday Fight Night to be held at the Ambassador Hotel would be of interest to me. It was. I wrote him back, “Yea, I’m working on inviting some people. I’ll get back to you.” Those people included the professional photographer Eric Nelson, whose photos you will see throughout this blog post and Melissa Ray, the three time Muay Ying Champion who is written about extensively in my book Bangkok Beat. Eric and I had taken two trips to Eminent Air Boxing Gym to do an interview and profile on Melissa as well as some of the other Muay Thais and the thought was it would be a good excuse for another reunion. Melissa couldn’t make it that night, due to a previous engagement, but Eric and I joined Chris and a group at ringside, including Sam from Australia and Emily from New Zealand for what would prove to be a most memorable evening.

If I may indulge you with my own limited pugilistic tale before getting back to the ring in Thailand. In 1964 I was a member of The Boys Club of America in Long Beach, California. Not The Boys and Girls Club of America, just The Boys Club. As Frank Zappa said, “Without deviation from the norm, progress is not possible.” The Boys Club was the norm in those days and at this particular club, which had all the accouterments one would expect for such a facility including outdoor basketball courts, it also had, smack in the middle of the center, a boxing ring. It was the norm to settle any disputes that arose between two boys, and disputes occurred frequently among those boys, by putting the gloves on and having them sort it out in the ring. An imperfect system to be sure and I never recall signing any waiver of liability forms or parent permission slips back then. After my one bout wearing the over-sized red gloves and no head gear, win, lose or draw I cannot recall it has been so long ago, my behavior improved. Put another way, given the choice between shooting hoops outside, playing ping pong, banking in the 8 ball or taking blows to the face as a 10 year old I made a judgement call that day.

Thai children, of course, come from a different culture and make different judgments. They are put on a path at an early age to get in the ring, repeatedly, particularly if they have few other options to bring honor and funds to the family. I spoke with a Muay Thai fighter in Florida once who had over 100 professional victories and many losses too. He began training and fighting seriously at age 8. Muay Thai is as important to Thai culture as bull fighting is to parts of Spanish culture and both have their controversies, just as American football does.

For the evening of Friday, February 3rd there was a four event under card and two main events. The match I enjoyed the most pitted Muhammad Iffat vs. Bowkow O. Junubon. (Below) Whether it was because these two fighters were of lighter weight or because it went all five rounds I am not sure, but their technical mastery of their art was apparent and that made it more enjoyable to watch.

The complete results for the evening were as follows:

vs. Konstantine Zap – Decision After 3 Round

Winner Mat Pitjean from France by First Round Knockout

As Joel Villinis, the owner and instructor of Echo Park Boxing in Southern California advises, “Never block with your face.” Joel has been a frequent visitor to Thailand and trains in the martial arts including Muay Thai. The bloody TKO by Henry Lee with an elbow to the face and the first round knock out by Mat Pitjean from France using his foot as a weapon are a reminder that as Mike Tyson said, “Everyone has a plan ’til they get punched in the mouth.”

The previous Muay Thai event I attended was at the Channel 7 Arena in Bangkok and it was an entirely different spectacle, complete with gambling and meant for a mainly Thai audience. What the Ambassador Hotel has done in conjunction with Proflex Fight Night and a group of congenial bar owners is create a western friendly environment that showcases talented fighters at a cost that is reasonable for spectators and fans of martial arts. It was notable that a good 20%+ of the audience was female that night, including members of Music of the Heart Band, Donna, Cherry, Grace and April who gave a knockout performance of the song known from the Rocky movies, The Eye of the Tiger. Well done ladies, particularly Donna on that number. 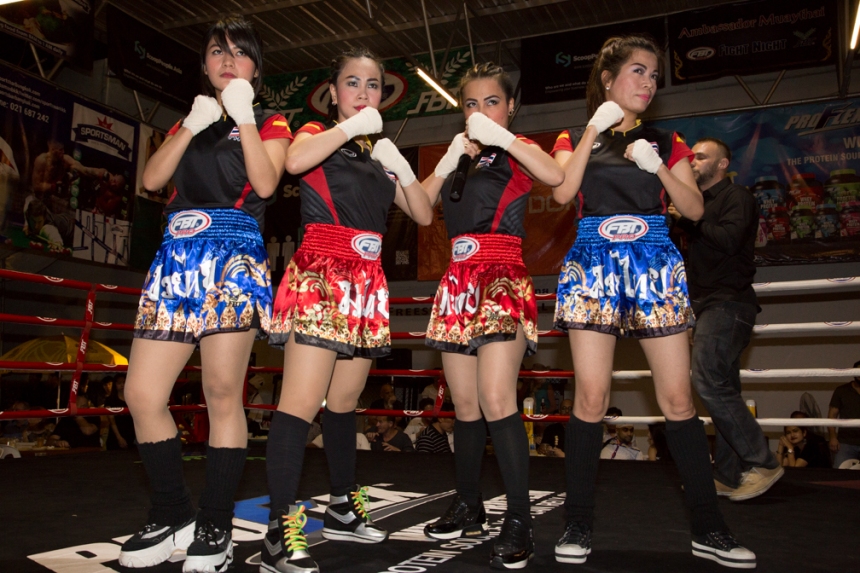 Left to Right: April, Grace, Donna, Cherry of Music of the Heart Band

Last Friday the Ambassador Hotel held a Mixed Martial Arts fight card and once again Music of the Heart Band was on hand. If you are a fan of the martial arts and are in Bangkok or have been reluctant to deal with the crowds and ticket prices at Lumpini Stadium this is a perfect venue to check out as part of your Friday night activities. The next scheduled Proflex Fight Night at the Ambassador Hotel is March 3, 2017. Go to this LINK for more details about this and future events. Thanks again to Eric Nelson for taking the great photographs and to Chris Catto-Smith for being Chris Catto-Smith.

A little over two weeks ago I got a text message message from the effervescent proprietor of Checkinn99, Chris Catto-Smith asking me if an upcoming Friday Fight Night to be held at the Ambassador Hotel would be of interest to me. It was. I wrote him back, “Yea, I’m working on inviting some people. I’ll get back to you.” Those people included the professional photographer Eric Nelson, whose photos you will see throughout this blog post and Melissa Ray, the three time Muay Ying Champion.