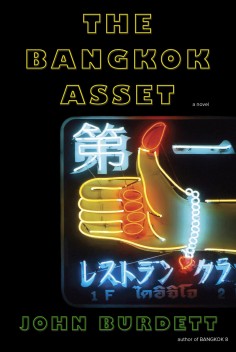 “Concentrate on the most unpleasant death you can think of, then how it will be at the end, when you realize there never was a heaven or a morality and every single little thing you did to make your life and the world better was a total waste of time.”

“Why are you so hung up on desolation?”

“It’s where the treasure is hidden.”

The above passage is near the end of Chapter 4 of John Burdett’s 38 Chapters and latest Sonchai Jitpleecheep novel, The Bangkok Asset – the sixth in the best-selling series and in my opinion his best. It’s taken over 10 years but I now have a new favorite, eclipsing the inaugural novel, Bangkok 8.

There is a lot to be enjoyed for the reader or R of this novel as Sonchai has made a subtle but important change in how he converses with readers whom he previously addressed as, DFR or Dear Farang Reader in novels past.

Technology has changed a great deal since Burdett penned Bangkok 8 in the early years of the 21st century. The times are changing and so is the genre Burdett chooses. Or has it changed as some have claimed? To steal three words from The Bangkok Asset used more than once, “I’m not sure.”

Certainly the recently launched novel is Burdett’s most geopolitical and “sci-fi” oriented to date but Bangkok continues to be a vital character. Fans of the series will recognize Soi Cowboy and the bar owned by Sonchai’s mother, the Old Man’s Club. Burdett also does a masterful job of peeling back the layers of Klong Toey Slum, or KTC (Klong Toey City) in the local vernacular. The relationship between Sonchai and his wife, Chanya continues to be a favorite for me as Burdett balances the characters’ boredom of a long marriage with friendly dick jiggles, while getting in messages of husbands being tamed and freedoms lost, often with his trademark Buddhist slant. New character, Inspector Krom, a techie expert assigned to the case provides some tense moments, sexual and otherwise, as the well dressed lesbian with Butch tendencies – she has more than a passing interest for Chanya.

The plot unfolds quickly with a neatly decapitated school-girl found murdered only blocks from Sonchai’s District 8 police headquarters, along with a revealing but unclear blood written message directed at my favorite Buddhist cop: “Detective Sonchai Jitpleecheep, I know who [smudge] father is.” Sonchai is a luek krung or half caste as he refers to himself. His mother is Thai and his father is American. We learn more about both in this futuristic mystery

Advanced technology and learning take center stage in this novel when Sonchai soon after witnesses a double-murder on a boat in the Chao Phraya River during a raging storm. My attention now three times grabbed. Smart writing, dark humor, morality plays, and psychological insights are what readers of the Sonchai series have come to expect and Burdett delivers big time, ambiguously and unambiguously as we are introduced to the future, Burdett’s future. It never stops being entertaining no matter how bleak the outlook and the future is bleak, according to Burdett – we will not be wearing shades. This R still found plenty to enjoy during the read – those LOL moments when the accuracy of the writing makes me laugh at the grim present and darker future which awaits. The cross as the pinnacle symbol of corporate identity and “media rats” being two examples. Burdett writes brilliant and believable scenes with plenty of dialogue. He can work in a conversation about social identities and asparagus crepes and make both interesting. Be prepared for religion as mythology along with healthy doses of skepticism or more likely, outright disbelief.

The middle portion of the book takes place in a Cambodian jungle where old ex-military and a psychiatrist by the name of Christmas Bride live and re-live the ghosts and experiments of Christmas’ past. Dr Bride is one of many Christ references to be found in The Bangkok Asset along with the devil himself. If I have a complaint with the book (I’m not sure.) it’s that Burdett is a Brit and a lot smarter than I. This made me run to the dictionary at times, and even Wikipedia, to keep up with the words and historical characters, although I was pleased to recognize one Italian painter. Smart Brits can be eccentric, I have read, and Burdett fits that mold. Understanding the eccentricities is enjoyable but attention is required. On the plus side Burdett provides interesting characters, even the short-lived ones, and their numbers were never overwhelming or burdensome for this reader.

There is much hidden treasure to be found in The Bangkok Asset by John Burdett and plenty of booty in plain sight too. This novel is well worth the price – $12.99 for Kindle or under $15.00 for the hardback. Buy the ticket and enjoy the ride.