Curiosity may well have killed a lot of cats. But I suspect those cats lived their lives in Sammy Davis Jr. years. Wandering around back alleys and tunnels the sort of which used to exist behind Checkinn99. Those cats didn’t die sitting on or on top of a couch – more likely they were on an awning that gave way in Soi Cowboy. Last Sunday there was a celebration at Checkinn99 and the catalyst was the publication of my very first book, BANGKOK BEAT. Albert Einstein has a few good quotes about curiosity. One is: “The important thing is not to stop questioning. Curiosity has its own reason for existing.”

Curiosity is what built Bangkok Beat. From the first time I met Chris Coles on Soi Cowboy over a decade ago to my first two lunches with Christopher G. Moore. The curiosity continued when I met Collin Piprell in Ari neighborhood to discuss writing, among other things, and later had a meet-up at Cactus bar where I met Dean Barrett and James A. Newman for the first time. Memorable meetings for me. For them commonplace.

Newman would later host Night of Noir I in April of 2013 where I would learn of the noir poetry of John Gartland among the many readers that night. James Newman would, a few days later, invite me to a meet-up at Bus Stop on Sukhumvit Soi 4 where I would meet John Gartland and his new friend and photographer Eric Nelson. Through Eric I would later meet a four time Muay Ying champion by the name of Melissa Ray. Through Melissa I would meet other champions.

Newman being Newman he decided to hold a second Night of Noir less than 9 months later. That night I met the novelists Cara Black and John Burdett among others. A photographer was there that night and he took some amazing photographs – his name is Alasdair McLeod.

I read Tone Deaf in Bangkok a book of non-fiction written by a middle aged American woman and author named Janet Brown, about her adventures in Thailand as a traveler and expat during those times. There are female expats – Janet reminds us of this with truthful writing. I got to know her via email and we would later have dinner together. She brought her friend along, Jim Algie, author of a book of non-fiction called Bizarre Thailand and a book of short stories called the The Phantom Lover and other Thrilling Tales of Thailand. When I stopped off to meet Janet Brown with my wife in Seattle in the summer of 2014 at Elliot Bay Book Company she introduced me to another Seattle resident, Kevin Conroy, who happened to be a regular traveler to Bangkok and it turns out Checkinn99 for over 35 years. There is a picture of Kevin in Checkinn99 from the 1980s in Bangkok Beat which he allowed me to use.

At Checkinn99 I met for the first time Chris Catto-Smith, Jerry Hopkins, Kevin Wood, Ted Lewand, Keith Nolan, William Wait, Clifton Hardy, Chris Wegoda, Peter Montalbano, Steve Cannon, Mark Fenn, John Daysh, Bernard Servello, MOTH, Mama Noi and Uncle Wat. I introduced Timothy Hallinan to the place because he asked me to and I was delighted to do so. I introduced the author Matt Carrell to Checkinn99 because I wanted to. Tim and Matt are both curious people. I like that about them. Before long I realized I had enough material to write a book. So I asked Colin Cotterill, the well known novelist and talented cartoonist living in the south of Thailand if he could draw a book cover for me. And he did. Right away. Damn him. Now I had a great book cover, plenty of material but no book. Life is in the details. I needed a hook for my book. An anchor really. The Checkinn99 history was my anchor – ably assisted by Thom Locke with his great short story – The Beauty of Isaan. Thom and I shared some early and fun times at Checkinn99, just as we did last Sunday when he and his family flew in from Northern Thailand especially for this event. The same James Newman noted above did the introduction for Bangkok Beat while John Gartland compiled an excellent chapter of noir poems. I cannot imagine the book without the contribution of any of these three writers.

I am going to let the pictures tell the rest of the story of a remarkable run of events that really took off when I created this blog four days before Night of Noir 1 and wrote my first blog post: I Am Not A Writer And Why The World Needs Them. That was less than 2 1/2 years ago. Last Sunday, my friend and actor John Marengo, whom I also met for the first time at Checkinn99, read that post, which is included in Bangkok Beat, to a good crowd who came to what was much more than a book launch – it was a celebration of the people, history and stories of Checkinn99, Bangkok and important people and events in my life. Better now than later. I know what’s waiting for me in the long run.

Bangkok Beat became available for purchase as an eBook on Amazon today – the paperback came out June 8th, 2015. But what I learned from writing this book is that it has very little to do with selling books. What it has to do with is more aptly described in Jim Algie’s story, Tsunami –  found in his Phantom Lover and Other Thrilling Tales of Thailand. You’ll learn to appreciate the value of friends and a campfire in Jim’s book and be reaffirmed that in the end it really does come down to good friends, family loyalties and the simple dignity of doing honest work and receiving honest pay. When I think of Chris Catto-Smith, Mook, Kiko, Cherry, Donna, Grace, April, Jesse and all the staff at Checkinn99 I’d say they are batting 1,000.

It’s not about tweets or Twitter followers. I’m certain of that.

Okay, enough with the sentimentality. The following is Bangkok Beat – the Live Version – July 26th, 2015. If you weren’t there, enjoy. If you were there, enjoy it again.

Anatomy of a Celebration 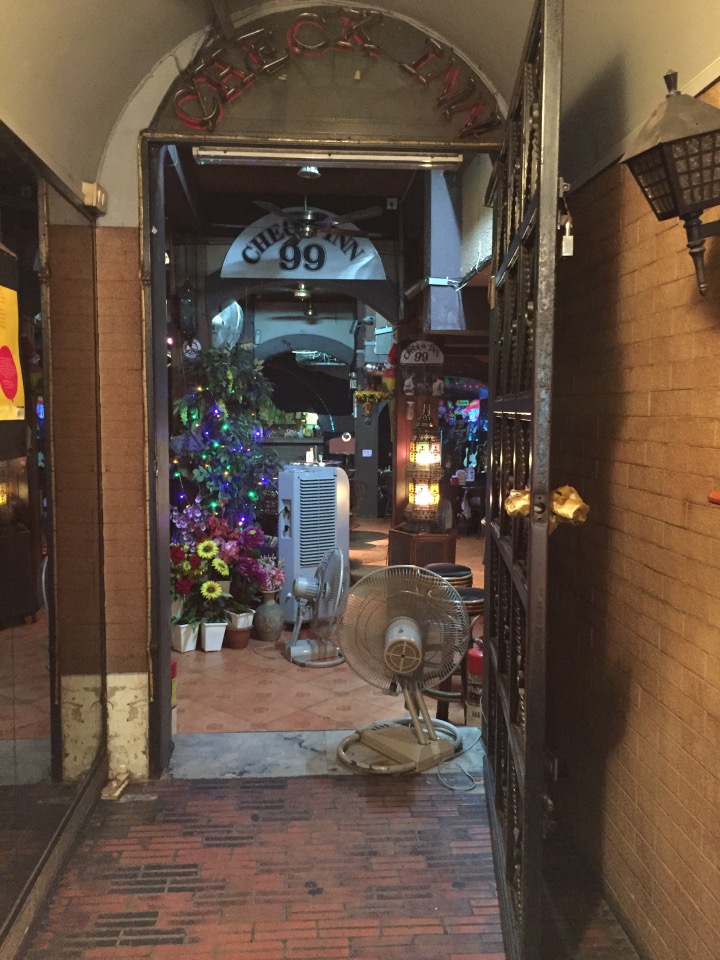 Welcome to the time tunnel 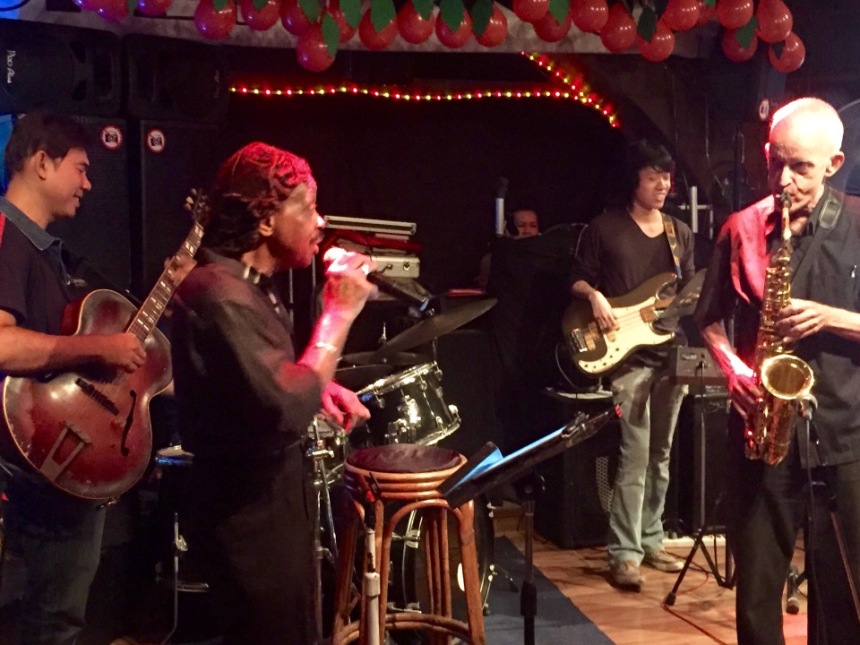 Have the Sunday Jazz going on when you start – no down time when Clifton Hardy and Dr. William Wait are in the house. Both Clifton and William are featured in Bangkok Beat with William getting his own chapter.

Be very pleased when the author who wrote your back cover blurb, Dean Barrett shows up early along with Alan Parkhouse of the Bangkok Post. Dean Barrett has his own Chapter in Bangkok Beat: Man of Mystery? Yes and No. Thanks to all the media members who came early and stayed late. 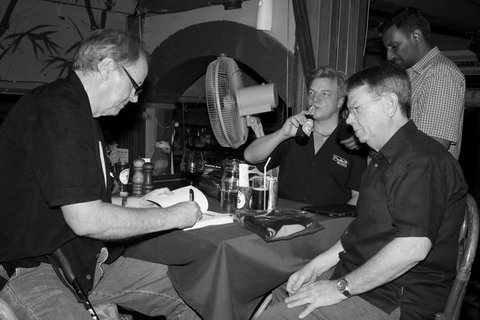 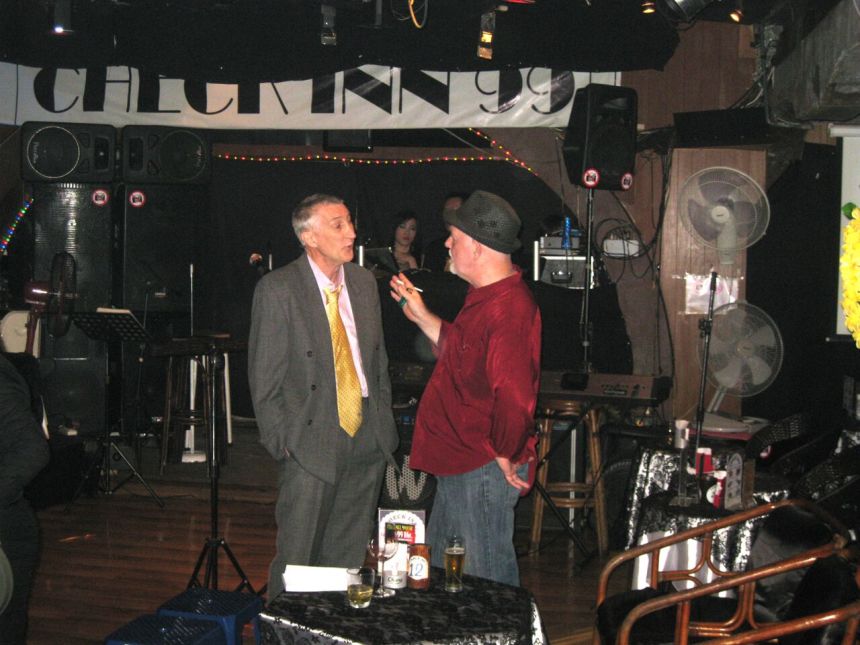 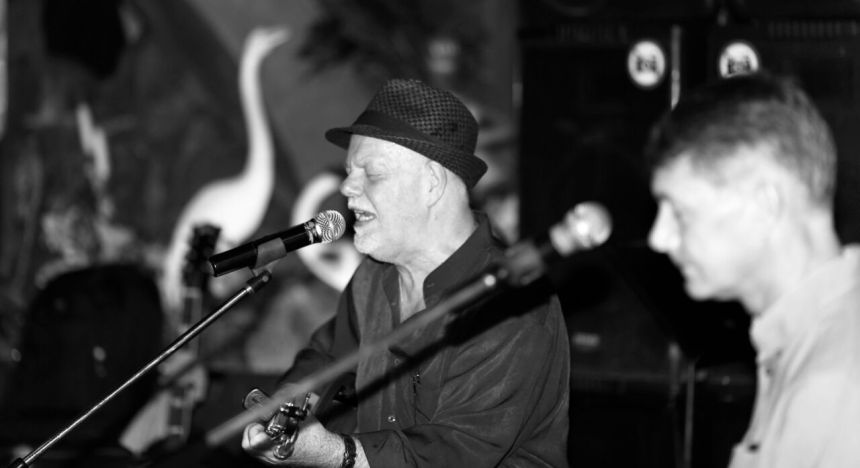 Let Kevin Wood and John from Queen Bee do their thing

Make sure the guests get along – author, journalist and editor Jim Algie speaking with retired Muay Thai Champion Melissa Ray. Both guests are featured in two chapters each of Bangkok Beat 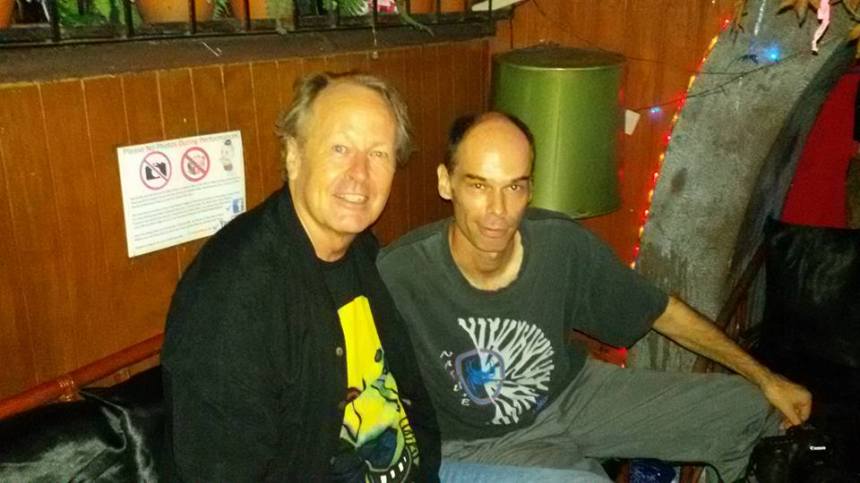 Make sure your friend and photographer Alasdair Mcleod is never far away. Alasdair’s photographs are featured in Bangkok Beat and he has one of his poem’s published in there – City Pulse.

Have another friend and photographer, Eric Nelson in the house in case Alasdair’s battery dies. Eric gets a Chapter in Bangkok Beat called – Keeping Photography Alive in Bangkok and his photographs are also featured. 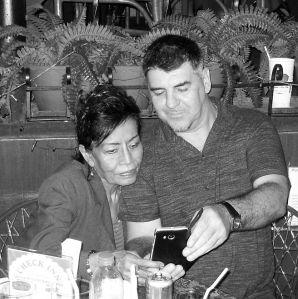 Convince the affable Keith Nolan to hang around in-between his two paying gigs that day. Keith shown with Guest of Honor Mama Noi

Have John Fengler fly down from Chiang Mai on a Saturday, wear his timeless cotton shirt to Checkinn99 and create some Bob Hope buzz on social media

Try not to be boring while talking to Jim Algie and Chris Wegoda. Chris is featured in The Rocky Horror Show Chapter as he starred as Dr. Frank-N-Furter in the Checkinn99 adaptation. Jim is the author of Bizarre Thailand and The Phantom Lover and Other Thrilling Tales of Thailand and is one of five major contributors to Americans in Thailand. 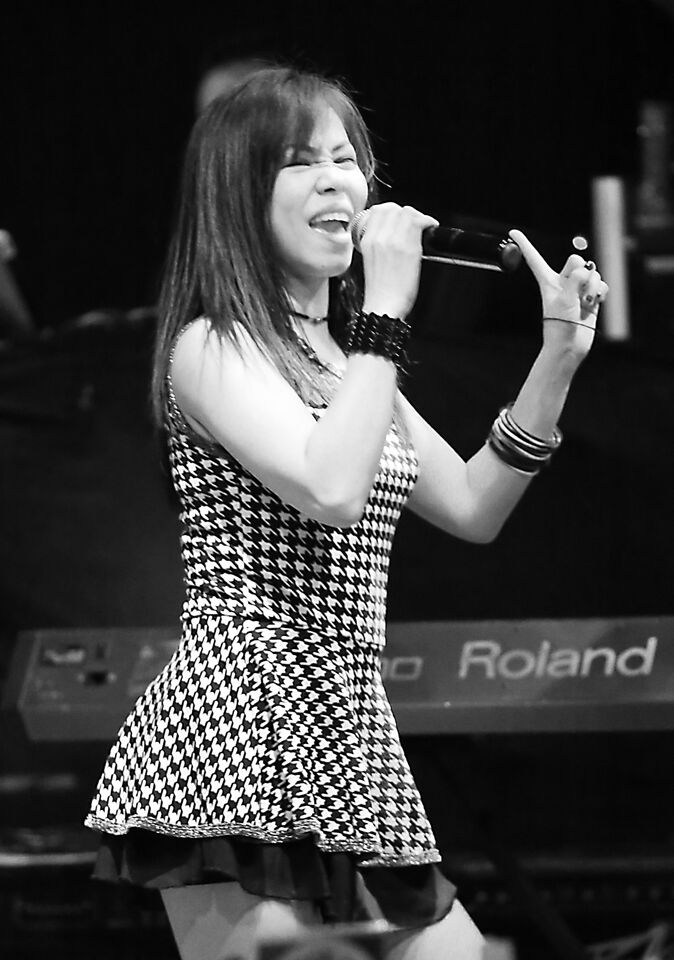 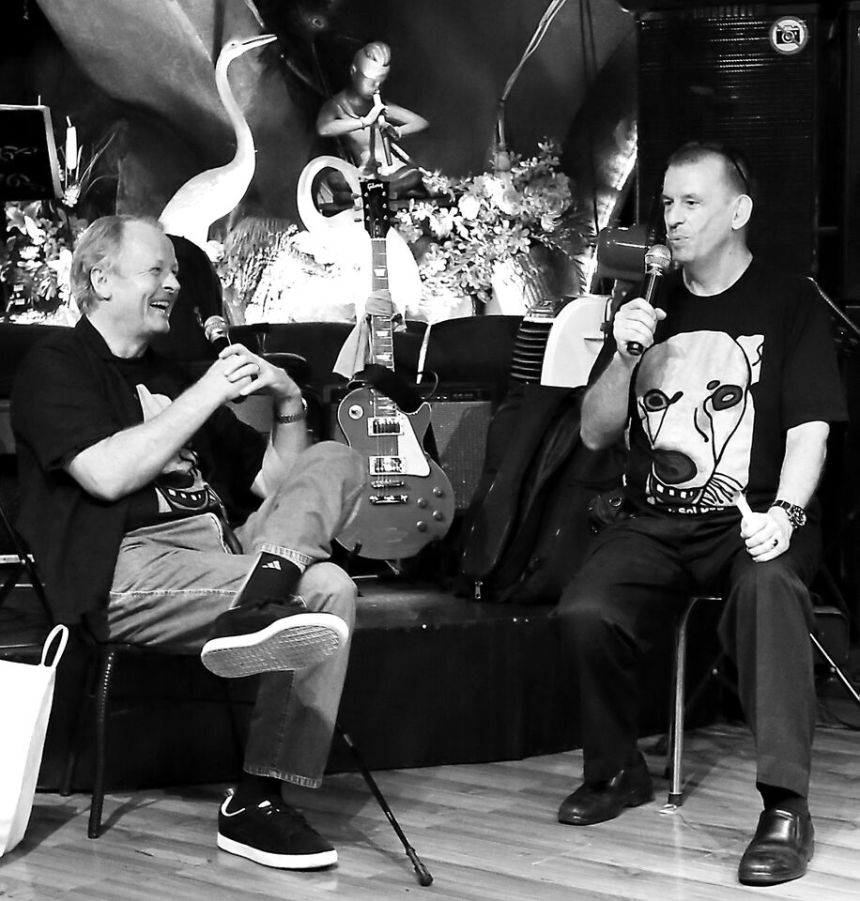 Chris Catto-Smith on the microphone. Kevin Cummings enjoying the show.

Try not too talk to much. Can’t win them all. 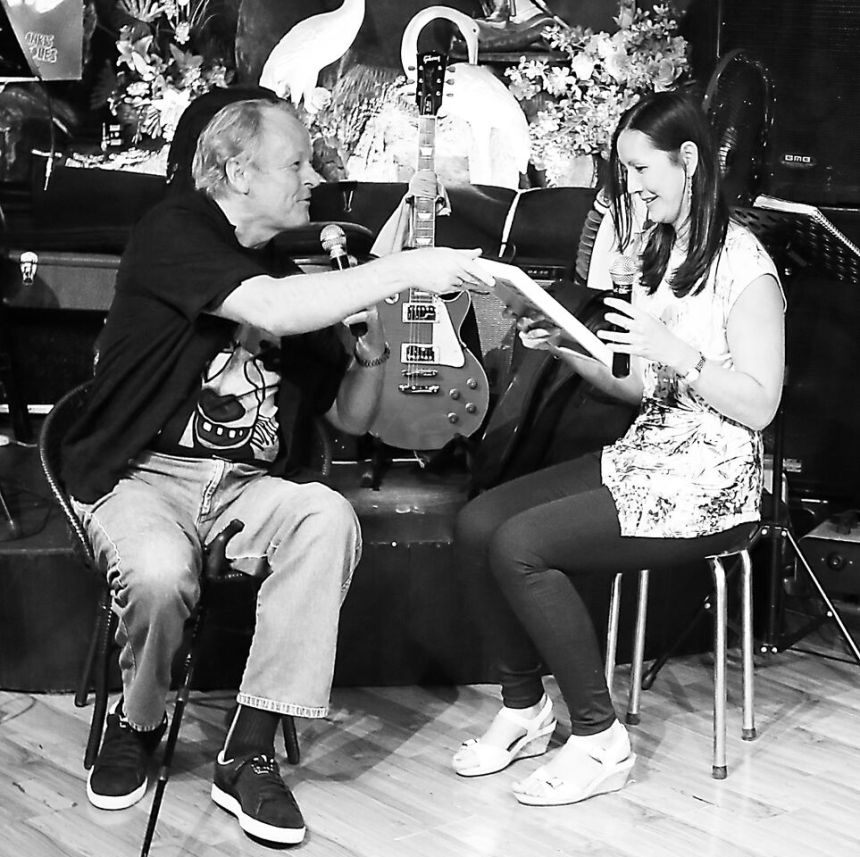 Bring up Muay Ying Melissa Ray and present her with her All Time Hits Award for most traffic on this web site for a single-day and all time. Melissa Ray to steal a line from Muhammad Ali, is simply, “The Greatest of All Time.” On Thailand Footprint and I’m sure her Mom would agree. 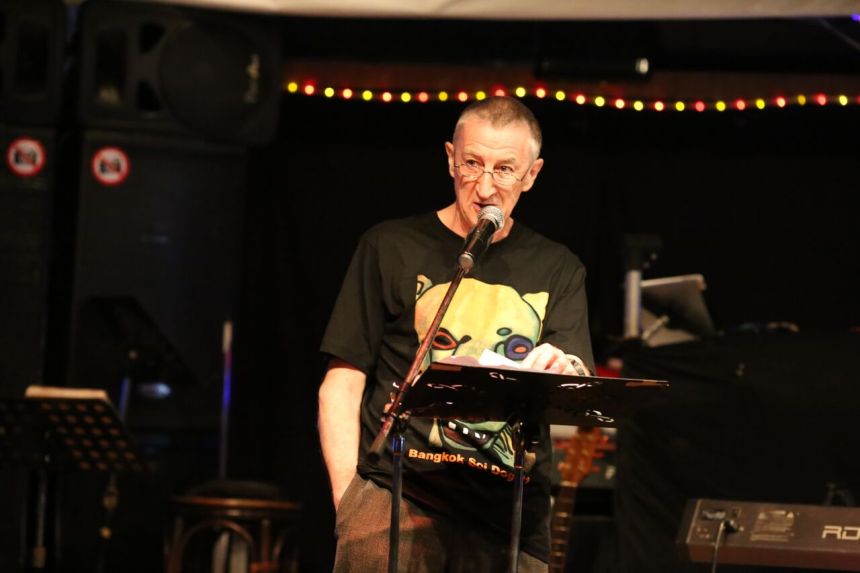 James A. Newman reading his introduction to Bangkok Beat. 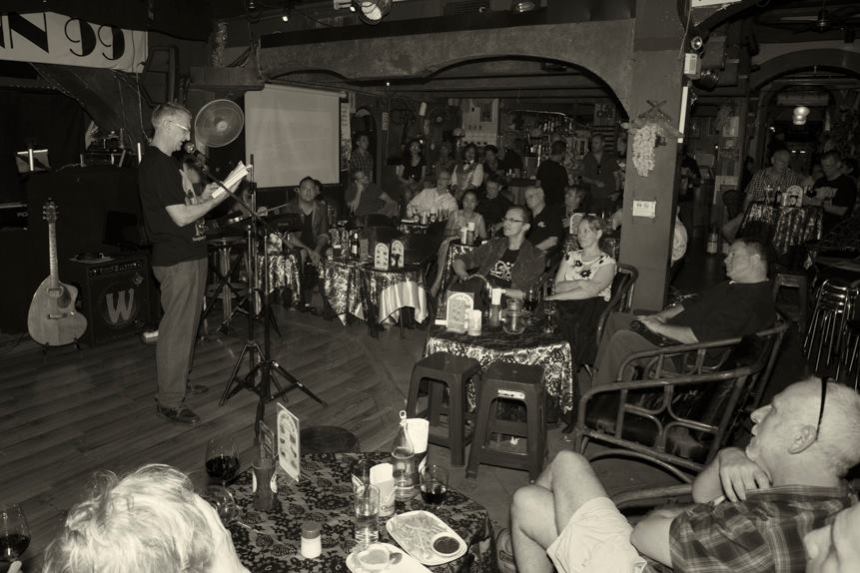 John Gartland reading The Beauty of Isaan as the author Thom H. Locke and others look on followed by The Eye AKA The Mamba Hotel loosely based on Checkinn99 and its characters. A Chapter of John’s verse is contained in Bangkok Beat 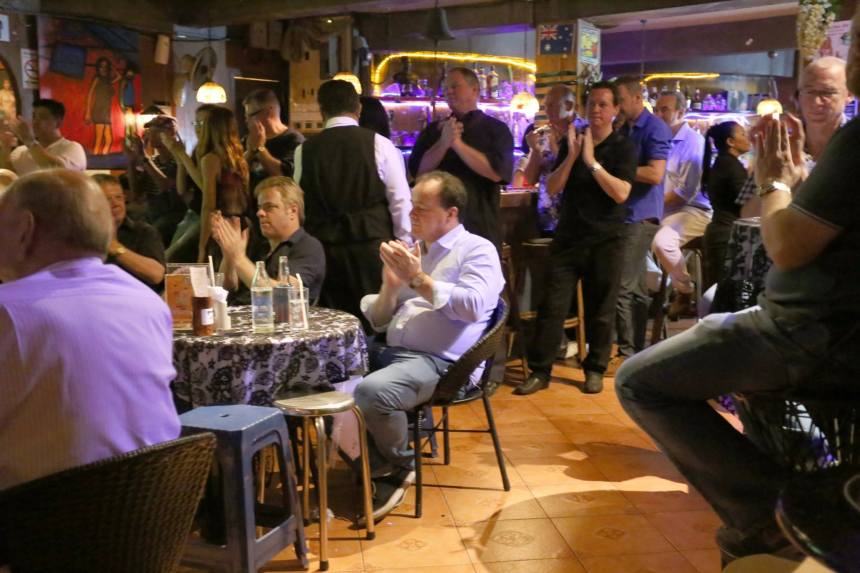 Have a packed and appreciative audience which included the author of a stellar novel, Hunters in the Dark, sitting at the bar 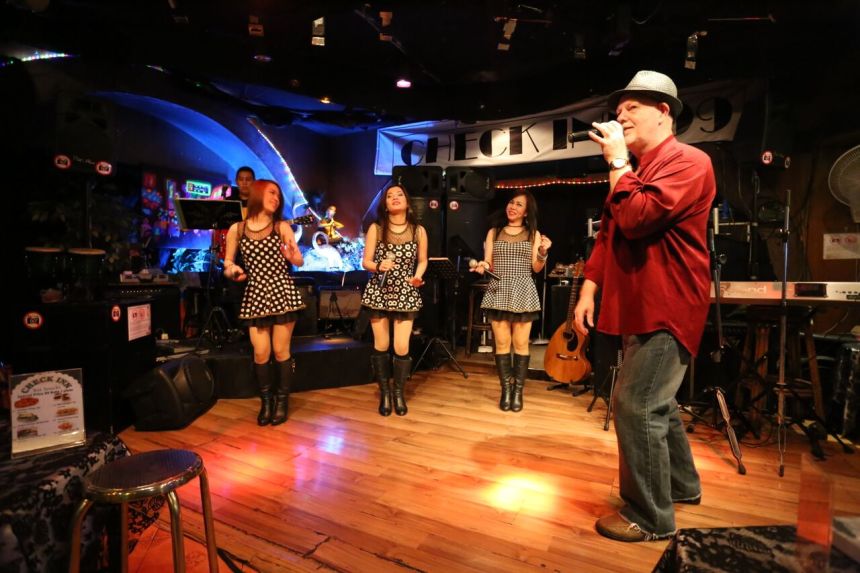 Bring Back Kevin Wood and MOTH 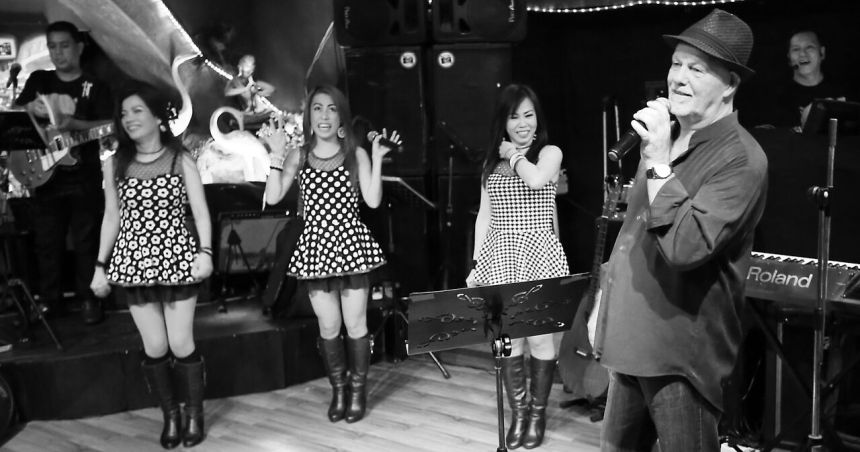 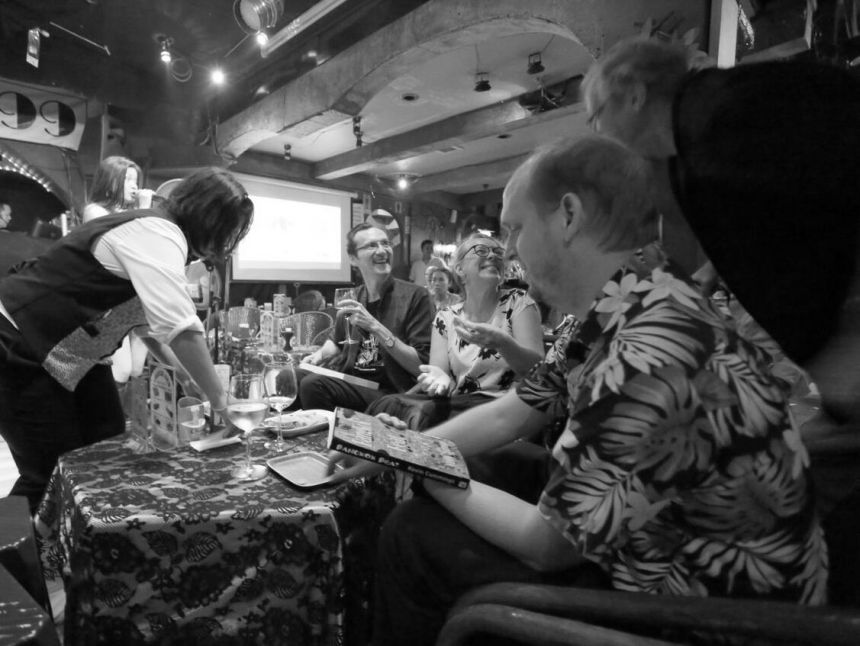 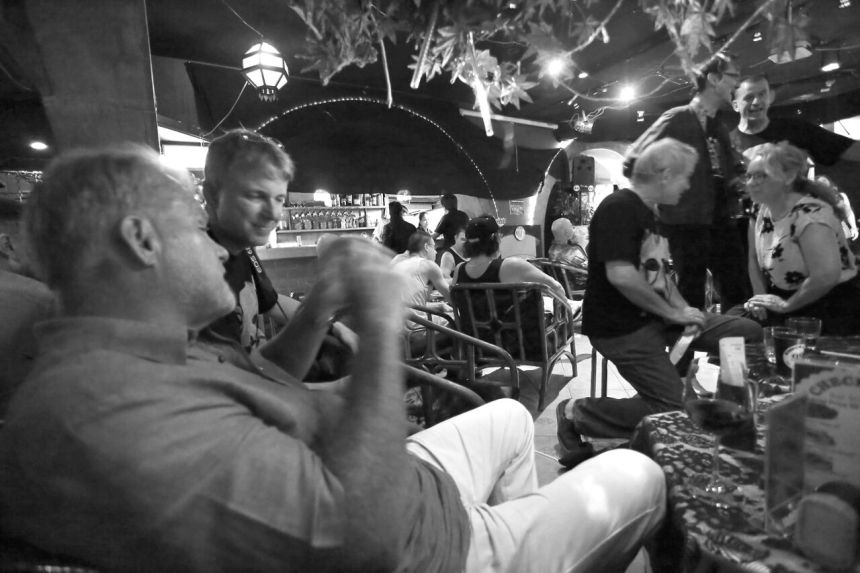 Collin Piprell an author, an editor, a mentor and a friend with another friend, Eric Nelson 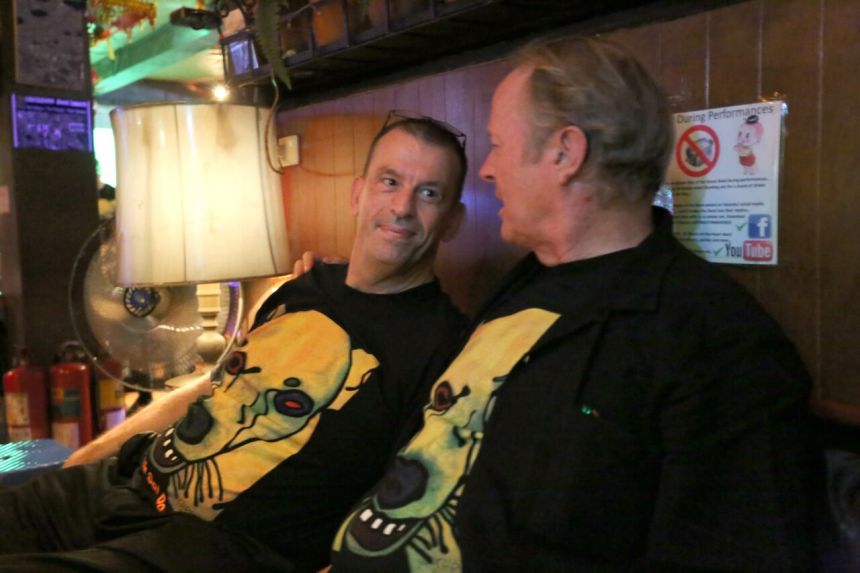 Allow for a moment at the end of a long journey

My wife and family who had been upstairs having dinner with Melissa Ray finally arrive. It was a good night. One I have no plans to repeat for 2-3 years anyway. If you got this far you deserve some music from Music of the Heart Band. Go back and have a listen if you haven’t yet or do it again. Why not? If you buy Bangkok Beat today or whenever that would be great. If you don’t that will be okay too. But if you find yourself in Bangkok city and have never been to Checkinn99, do stop in. You never know when greatness will be in the house. Thanks to all the great people who came out on July 26, 2015. Another memorable date in Checkinn99 history, which began in 1957. 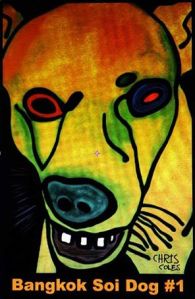 I’ll get attribution right one of these days.