Write a book. Hell, I can do that. How hard can it be? I was sitting with a bunch of authors who had written a bunch of books, over a year ago at Checkinn99. So I told the owner, Chris Catto-Smith, “I’m going to write a book of non-fiction stories, which will include a chapter about the history of Checkinn99.” The cabaret bar owner and former Royal Air Force jet airline pilot replied, “Good idea.” It sure seemed like one at the time. 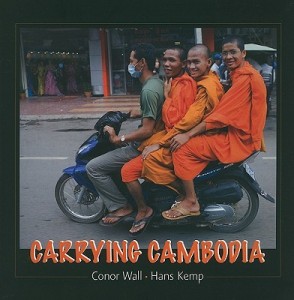 Yesterday I was in Checkinn99 again. It was a good day. I brought my longtime friend Bill there for the first time and he really enjoyed himself. The music was great as usual. Early on I spotted the photographer, Hans Kemp, sitting with a group so I went up to his table for a quick chat. Crime Wave Press recently published Hans’ first novel, A NOSE FOR TROUBLE under his pen name of Jonathan Kemp. I’ve already purchased A NOSE FOR TROUBLE for my Kindle. It has a great action packed beginning including some 1970s NBA basketball references, which I particularly enjoyed. I’m looking forward to reviewing the novel after I finish it. I asked Hans, a very accomplished photographer and publisher, about his experience of writing his first novel. “It was harder than I thought,” the creator of numerous books on photographic topics, including Carrying Cambodia, and Bikes of Burden said. That made me laugh, as I’ll soon be crossing home plate after a long round-tripper, completing my first and I am pretty sure last book, Bangkok Beat. 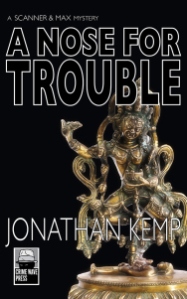 Hans has already received his first four Amazon reviews with an average rating of 4.8. You can click the picture above to learn more about Hans’ debut crime novel, A Nose For Trouble, which is available now.

Neil Gaiman has a great quote that I came across recently. I believe it to be true. It is:

Whatever it takes to finish things, finish. You will learn more from a glorious failure than you ever will from something you never finished.

I do not expect Bangkok Beat to be a failure. The only way it would be a failure is if I failed to do what I said I would do. When it comes out that will be success enough for me. As the saying goes, I have learned a lot during the process. I happen to like Neil Gaiman, as a writer and as someone who gives advice to writers, no matter what their skill level may be. Here is one of my favorite pieces of advice from Neil: “Tell your story… as quickly as you can, start telling the stories that only you can tell — because there will always be better writers than you, there will always be smarter writers than you … but you are the only you.”

If I were a younger man and a baseball player I’d be looking for a tryout in the rookie league. In professional baseball you have: A Ball, Double A, Triple A, and the Major Leagues. I’ve known guys who have played baseball at each of those levels. Self publishing allows just about everyone to be a rookie and make those inevitable rookie mistakes.

What have I learned? Neil is right. There will always be writers better than I could ever hope to be. Three Bangkok based writers of non-fiction come straight to mind: Lawrence Osborne, Jim Algie and Christopher G. Moore. They also write fiction better than I ever could but at least I have been smart enough, so far, not to tred on that turf. Before you ever buy Bangkok Beat make sure you have read Bangkok Days by Lawrence, Bizarre Thailand by Jim ,and The Age of Dis-Consent by Christopher. These three gentlemen have been in the Major Leagues for a long time and it shows. But if and when you are ready to read stories that only I could tell, I do hope you will consider buying Bangkok Beat even though there are hundreds of thousands of choices out there.