A very interesting blog post detailing that no matter whether you take a fast VIP bus from Chiang Mai or a slow 2 day day boat ride from there to Luang Prabang, accidents happen in the Land of Smiles …

We take to the open road

From Chiang Mai, we headed straight to the Thai/Laos border and caught a two-day “slow boat” down the Mekong River to Luang Prabang. We were looking forward to a couple of quiet, scenic days on the water. For the most part, that is exactly what we experienced.

There were about ten other people in our group who were making the same trip. On the way to the border, we had a quick stop in Chiang Rai to see the very modern Wat Rong Khun (the White Temple). It was spectacular to see! (We’ve since learned that the temple was damaged by an earthquake in early May. It’s anticipated to take a couple of years to repair the damage.) 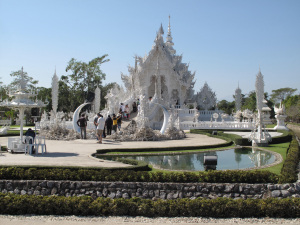 Our group, along with several others, stayed overnight in Chiang Khong, Thailand which is right at the border. The next…