Anyone looking for a respite from the lock down city of Bangkok or anywhere in Thailand for that matter, might want to consider the relative tranquility of Phnom Penh, Cambodia on May 31st and June 1, 2014 respectively. On those dates poet noir, John Gartland will be reciting his original poetry. On May 31st he will be part of a lineup that will include the man in black, Christopher Minko and his Khmer vocalists in Krom. John, Christopher and Krom have all been featured here at Thailand Footprint. Perform a simple search to learn more about them if you are not already aware. On June 1, 2014 John and Christopher will both be performing at the renown Meta House in Phnom Penh. Check them out if you are within a 90 mile radius.

John has allowed me to share some of his original poetry here again. Chris Coles has also, once again, permitted his art to be shown here as well. Enjoy the art and poetry wherever they may find you: 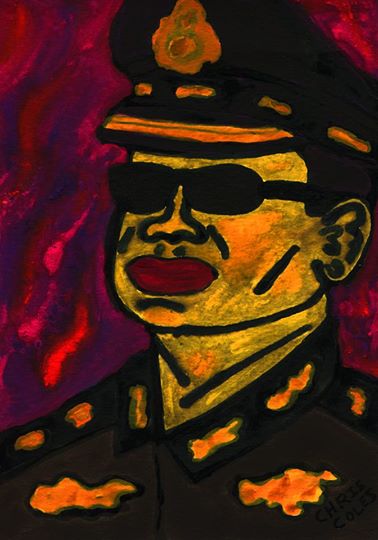 THE GENERAL in the Bangkok Night by Chris Coles

Man,  I’m an ex-Private Eye, I can strike a cool pose

while  listening to others’ production-line prose,

self-published  wunderkinds who believe their own hype,

tales of drug-hauls and bar girls and crooked police,

Just  a crime-writers’ gig, at the Mambo hotel,

but outside it’s for real, and they’re guilty as hell.

It ‘s a crime-writers’ gig, at the Mambo hotel,

where  whorehounds  had partied for fifty odd years.

But  life, like a crime scene’s not all it appears;

and, under new management,  the riskiest act,

would be squeezing the original mama san’s hand,

which once, like the anthem, could make a room stand,

and left a broad smile on the girls in the band,

at the Mambo Hotel.

a locked up beauty shop, and dust;

and must shoot the fictional breeze on stage.

But, as the Eye on the case, I’ll cut to the chase,

the major heist is on the street,

and  there’s  fresh blood on the page.

Hey, I  was  an Eye, wrestled crime for a living,

and  still have a hunch for who’s making a killing.

The patriots and flag sniffers, feeling the force,

they’ve  closed down the city and cheered themselves hoarse,

till  the tourists and hookers are packing their trunks.

Man, the hacks know the issue, but no one dares say;

destabilization is sent from upstairs,

since they can’t get joe public to vote the right way.

gridlock on the streets, and a coup in the air.

Look, I’m just an Eye, with an odd tale to tell,

at a pulp writers’ gig at the Mambo Hotel.

We have your co-ordinates, and know precisely your destination.

It is election time, and in the street of the plastic surgeons,

posters of men in white uniforms and fixed grins flap in unison.

This is a one way street, and a u-turn invokes serious penalties.

Traffic proceeds at breakneck speed through the great arch of autocracy.

By the pantheon of patriarchs, diseased birds slumber on the frozen plumes

The great highway of charlatans is multi-lane, crowded at all hours

and will bring you invariably to hypocrisy monument, where all roads meet.

gold leaf to flatter a glowering idol at the revered corner of errors;

a  bottleneck, as many pilgrims buy merit from the four faced god here;

dead slow as beggars kneel in the road, abandoned to divine protection.

Proceed by the grand plaza of pointless purchases, and slow down for

heavy traffic at narcissus mall, street of six names for your inferior.

You must pass through the groveling gate, temple of the abject loop;

this is street of six titles for your superior, leading to the institute

of impregnable ignorance, graced with a royal charter. Take a right

on the grand drive of distracting flags, to the causeway of embalmed kings.

Go forward to the mall of the eternal flame. At karaoke heaven,

superlative banality may cause your ears to bleed. Accelerate away.

Proceed. Traffic circles perpetually round the academy of harlots;

disrobe, and leave a mekong to appease priapic spirits.

You must drive through the emporium of envy and unsatisfied desires,

bypass the chaotic terminus of transsexuals for denial drive,

where it is always rush hour, and the men at Jamaica corner sell oblivion

in small packs to foreigners, who are ransomed by the tourist police.

Near the fountain of corrupted thought, pass beggar children

fishing for coins and fever in the catfish dark of drains:

at last you are near your destination, on a street of fortune tellers.

Here, gamblers with their cards and severed fingers,

taking pains to keep their face white and uncompromised,

play endlessly, and disregard their loss.

This dusty cul-de-sac is yours.  Abandoned

and withered wreathes are strewn

about  some broken idol’s feet. It is election time.

New posters of the white and smiling uniforms

wallpaper every space. This final cul-de-sac is yours;

self-hatred and the breath of street dogs, foul upon your face.

For more information about the poems and performance schedule of poet John Gartland go to http://www.johngartland.net or click picture, above.

This blog post may also be viewed at Chiang Mai City News by clicking the banner, above:

One Response to “Cambodia, anyone? The Poet Noir John Gartland, Krom and Christopher Minko to Perform May 31st and June 1st”