James A. Newman – The nattily attired Master of Ceremonies for Bangkok Night of Noir 2014

For the second time in less than 9 months author James A. Newman, artist Chris Coles and company decided it would be a good idea to hold a Bangkok Night of Noir. It was. The purpose was to have an evening of music, readings, art and photography depicting the numerous sources of noir found in Bangkok, Thailand. The Check Inn 99 is the perfect venue for such an event. A place where Bob Hope, Dean Martin and Raquel Welch relaxed after USO shows during the Viet Nam War. A colorful history understates the facts of the Check Inn 99 by a long shot. It’s a place where, for anyone who had forgotten, Christopher G. Moore reminded us in a finale reading that a  dwarf once worked as the doorman for years at the entrance to the Check Inn 99 tunnel leading toward the door. And then one day he disappears. How does a dwarf go missing? It’s Bangkok, that’s how. Just down that tunnel a previous owner of the establishment was beaten so badly, over creative financing rumors, he died the next day. It happened on the eve of one of Thailand’s many political coups, decades ago.

The very day of Bangkok Night of Noir, Sunday January 5th, 2014 there was a film crew shooting a Karaoke scene in the morning for an upcoming movie regarding Thailand’s infamous last executioner, Chaovaret Jaruboon, a drinking buddy of Bangkok author, Jim Algie and a living noir legend until he died in 2012. If you  were looking for a setting to read dark fiction and show the neon noir world of Bangkok’s nightlife, you were in the right place. The 2014 Night of Noir kicked off, reading wise, later than some guests had anticipated. There was a full house, much more crowded than the one held in April 2013.

Photo Courtesy Check Inn 99  – Two Hours Before Tip Off. Veteran Waiters Rest While They Can

Music of the Heart Band came to the rescue as people were still buying books and getting them signed. Highlights for me, before readings began, were talking with Cara Black about some of her SoHo Crime colleagues and meeting John Burdett, author of the Royal Thai Police Detective Sonchai Jitpleecheep series, which started with Bangkok 8. Just when I was getting impatient, Music of the Heart Band broke out into a song in French, known for its dedication to the fighters of the French Foreign Legion: Non, je ne regrette rien, which caused out of town visiting, New York Times best selling author and Francophile, Cara Black to smile broadly and sing along. 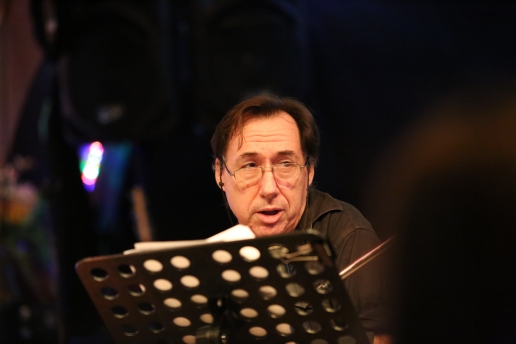 The readings started shortly thereafter with screenwriter, actor and presentation coach John Marengo reading from James A. Newman’s latest, The White Flamingo. Marengo has decades of acting and voice over credits. Newman’s fictional Fun City, AKA Pattaya never sounded better or bleaker, depending on your perspective, coming from Marengo’s microphone. That was followed by his reading of the Charles Bukowski poem, Dinosauria, We. A dark Buk special about death, decay and pessimism for mankind.

Tom Vater read next, publisher of Crime Wave Press, author of Devil’s Road to Kathmandu and The Cambodian Book of the Dead. The latter I have reviewed and recommend. When Tom Vater talks, I listen. He always has something interesting to say. He prefaced his reading with some fascinating history regarding the world’s busiest airport up until 1975, run by the CIA in Long Cheng in Laos. Tom is the co-author of the screenplay, The Most Secret Place on Earth – The CIA’s Covert War in Laos. That background will make his upcoming novel, The Man With The Golden Mind – a Detective Maier novel, which Tom read from, invaluable. It was a riveting read.

The Dean of Bangkok fiction was up next to read from a book I am proud to say is in my library: The Go Go Dancer Who Stole My Viagra and other Poetic Tragedies of Thailand. I am a fan of Dean Barrett’s writing and poetry. I am also a Dean Barrett fan. I’m going to go out on a limb here and make what could be misconstrued as a political statement, but what the hell: the world needs more Dean Barrett’s. A lot more. Always entertaining, gracious and humorous.  All of Dean’s readings are good but it’s tough to beat the classic, No One Wants to Boom Boom, Anymore.

John Burdett was in the house and that was a pleasure to see and to listen too as well. Mr. Burdett read from his latest Sonchai Jitpleecheep series, VULTURE PEAK about organ trafficking.  He starts off with these two quotations from the beginning of Vulture Peak, juxtaposing the two, which gets one thinking about morality and unintended consequences:

What you do to the world, you do to yourself. – Buddhist proverb

If a living donor can do without an organ, why shouldn’t the donor profit and medical science benefit? – Janet Radcliffe-Richards, Lancet 352 (1998), p. 1951

John then read a wonderful passage regarding the murder investigation from Vulture Peak, which I have only included the very last part of the brilliant conclusion :

“Really? That will be helpful. By the way, what genders are the victims?”

Now I notice something else. “No blood?”

“Somebody cleaned up meticulously. They even used some chemical that neutralizes our tests. I tell you, whoever did it were professionals. There were certainly more than one.” I nod.

“Any ideas?” the doctor asks when we have replaced the sheet.

“You mean whodunit? Only in the more general sense.” She raises her eyes. “Ronald Reagan, Milton Friedman, Margaret Thatcher, Adam Smith. Capitalism dunit. Those organs are being worn by somebody else right now.” 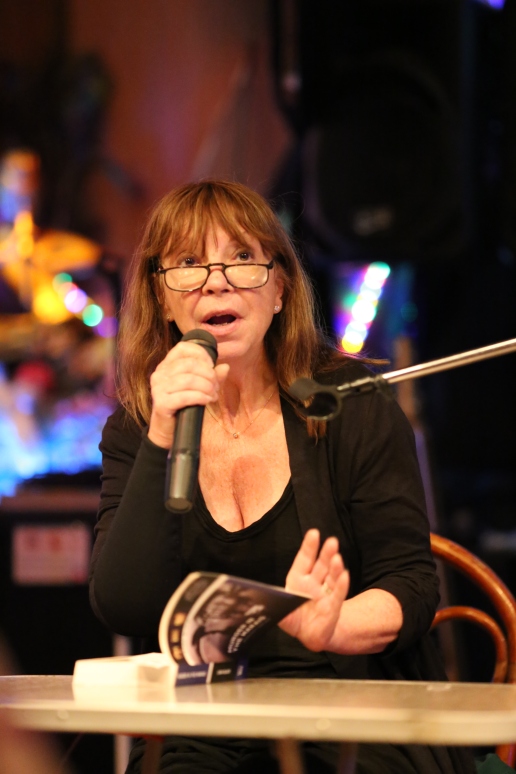 The out of town guest of honor for the evening was Cara Black. John Burdett handed Cara the copy of Vulture Peak from which he read, after he finished. Cara seemed genuinely thrilled to receive the copy. Likewise, Chris Coles presented Cara Black with a copy of his book, Navigating the Bangkok Noir.  I would learn later, the copy of The Marriage Tree, which Christopher G. Moore read from last, now resides with Cara in The City by the Bay. Charles Bukowski got it all wrong. This was a congenial, generous and optimistic group of noir scribes.

Cara Black, deemed Madam Noir by M.C. James A. Newman was next up. Her protagonist is Aimee Leduc, half-French; half-American. Aimee is an computer fraud expert, can dress fashionably in Paris or in disguise for the job. She can handle a Beretta when need be. Her partner is a 4’0″ dwarf and computer genius, named Rene. Together they could probably team up with Vincent Calvino and solve the mystery of the missing Check Inn 99 doorman in two weeks time. But that was not the task at hand. Cara Black read from her first of 13 Aimee Leduc Investigations, MURDER IN THE MARAIS, but she did need the assistance of Calvino’s creator as she wore Mr. Moore’s spectacles to get the job done. I find her writing style eloquent and tense where it needs to be. Cara lives in San Francisco with her husband and son. Paris, the City of Light, is always a central character in her novels. I got the feeling Cara likes a good adventure and she got one at Night of Noir. She seemed to appreciate every moment and be in the moment. 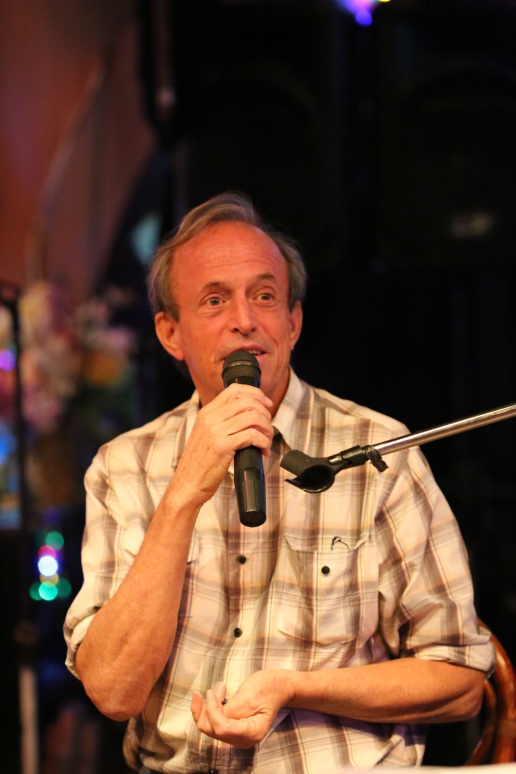 Bangkok Noir artist Chris Coles – Author of Navigating the Bangkok Noir speaks about: The Stuff  That Lies Beneath Bangkok and South East Asia – Click the Photo to take you to the Chris Coles Blog

A Night of Noir is incomplete without a Chris Coles presentation. Enthusiastic about the where and when of Bangkok and what lies beneath the city. The where being almost anywhere after dark and the when being, now. Please take the time to click the above picture to take you an excellent review of the presentation Chris put together, complete with copies of all the pictures flashed onto the screen at 4’x5′ size. You can also go to his blog by clickng here: CHRIS COLES NIGHT OF NOIR TALK AND PICTURES. Chris also had the honor of introducing the final author of the evening, Christopher G. Moore, well known for his over two dozen novels, including the Vincent Calvino Crime Series, The Thai Smile Trilogy and his cultural books of essays, among others. 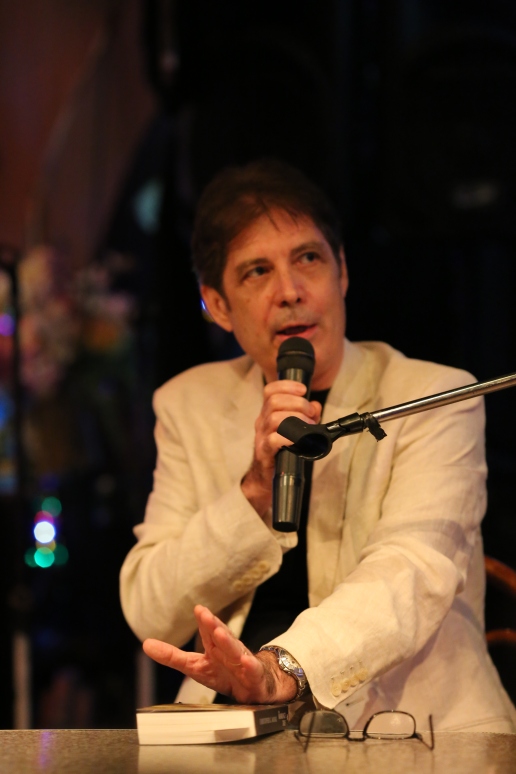 Christopher G. Moore read from his latest Calvino caper: The Marriage Tree, the 14th in the popular series, which has Calvino dealing with some cumulative trauma issues regarding the deaths of close friends in Rangoon and Bangkok. Christopher’s reading was appropriate as he chose a scene where the fictional Calvino walks down the real life tunnel of the Check Inn 99 to find Colonel Pratt playing the saxophone near some white flamingos. It was art imitating life and it was fun. Even the ancient waiters were smiling.

Chris Catto-Smith was coaxed onto the main floor one more time to recount the colorful history of the Cabaret Club. I never tire of listening to Chris speak about the history or seeing the old black and white photos of the club and Bangkok of an earlier time flashed onto the big screen. Among the things I learned, those white flamingos may like to hang-out around plastic flowers but they are made of cast iron and Chris even hammered the point home for the audience. Music of the Heart Band came back on to perform. Some stayed but it was late and many headed for home or wherever into the Bangkok night.

Could the readings have started a little earlier? I suppose they could have. But for one night some of the top noir stars from Bangkok and San Francisco aligned just as they were meant to align – perfectly.  James A. Newman, Chris Coles, Chris Catto-Smith and all the authors are to be commended, once again, for pulling it off. Anyone who plans to live or stay in Bangkok for any length of time would be well served by the words of Alan Watts: “Things are as they are.” Since the group picture was taken late some of the authors had already left due to commitments the next day. When asked to join in for the group photo, no one had to ask me twice. I’m not a noir writer or a noir artist, but the world still needs them. And as Chris Coles stated more than once, enthusiastically, during his presentation, this is a city with an almost infinite source of inspiration for noir.  It was a memorable evening. As I was headed up the elevator to my condo around 1:15 a.m. my telephone vibrated. It was one of the authors: “Back at the bar!” it read. I smiled as the doors opened to my floor. The beat goes on in Bangkok City.

All Photographs shown, with the exception of Check Inn 99 Entrance and waiters, taken by Alasdair McLeod of Bangkok, Thailand. Permission for the reproduction of these photographs is needed from Thailand Footprint if used for commercial purposes.