I’ve just finished watching a 90 minute video/documentary (over the course of two days) called The Henry Miller Odyssey (1969), which I found on an interesting blog: Mia Loves Henry Miller at http://www.mialoveshenrymiller.com . It’s a very interesting odyssey indeed about the life and times of Henry Miller featuring the voice, video clips and good friends of the American writer. He talks of his early days in Brooklyn, his first marriage and the Paris years. Henry’s only regret was that he didn’t go to Paris earlier. He tells of getting fired from one job as an assistant editor of a mail order catalog and a voice over reads from another letter firing him from The Chicago Tribune.

Some of the revelations include his anti-American and pro-Parisian sentiments, moving in with Anais Nin and the importance of her editing. Henry admits if he could have gone back he would have written smaller, slimmer books. At the time he left everything in because he thought everything was important but Anais talks about how everyone was interested in what she deleted or left out from Henry’s writing.

“I will write what no man dares to say and they can take it or leave it. But I think they will take it.” Henry Miller

Handwritten notes about learning watercolors, postcards written, and his break-through novel The Tropic of Cancer. Conversations with Anais Nin reminiscing about their past together in Paris and their writing. The diversity and irregularities of Paris thrilled him as much as the conformity and mundaneness in America bored him.

Henry talks about the joys of many things including the joy of going into the public urinals in Paris, all shown with wonderful video footage of the city and the surrounding provinces. There is something very childlike about Henry Miller, which I think helps explain his joys more than his sorrows.

It’s an insightful look into the life and mind of Henry Miller and how important our attitudes are. I particularly liked some of the footage near the closing with Henry playing at the piano.

I found the 90 minute free video of The Henry Miller Odyssey far more interesting and entertaining than three of the last four movies I have paid to see. Check it out if you are so inclined by clicking the picture above of Mia Malone Jennings, which will take you to Mia’s blog: 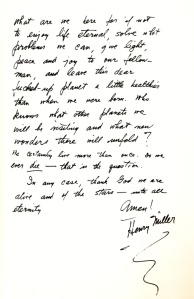 What are we here for if not to enjoy life eternal, solve what problems we can, give light, peace and joy to our fellow-man, and leave this dear fucked-up planet a little healthier than when we were born. – Henry Miller