Yesterday, I went to the historic Bangkok Cabaret bar, CheckInn99, which has a colorful history that dates back to the 1960s and had a 1970s flashback – the good kind. In 1979 on a Sunday my best friend left after spending the weekend in San Francisco, where I was living at the time. After he left, on a whim, I went into a comedy club in the Richmond district of San Francisco. On that Sunday there was an improvisational comedy group doing their thing and they were doing it well. I commented to the guy next to me, in the not particularly crowded bar called The Holy City Zoo, “That guy looks like Robin Williams.” The response was, “That’s because it is Robin Williams.” The rest of the evening was spent watching greatness and it wasn’t all Robin; they were all great and improvisational comedy is a tough nut to be great at.

There is another art form that requires improvising, talent, teamwork and unselfishness. It’s called Jazz. To listen to jazz was the goal yesterday when I met a friend to check out the Sunday Jazz on Sukhumvit series that has been going on at CheckInn99  for about four months now. I have no good reason for not going earlier. Shame on me but I am very glad I went yesterday.

Whether it is comedy, basketball or music when you are in the presence of greatness it’s evident. It’s obvious. So it was yesterday; among the talented group of jazz performers that rotated in and out, just like a winning basketball team, was leading scorer and trumpet player Steve Cannon, whom played every minute.

To be in an uncrowded, intimate setting at an historic venue, as I was at the now defunct Holy City Zoo, when I saw Robin Williams is something you never forget. Likewise to find a trumpet player the caliber of Steve Cannon playing on a Sunday afternoon at a place where Bob Hope used to frequent is also a day to remember. 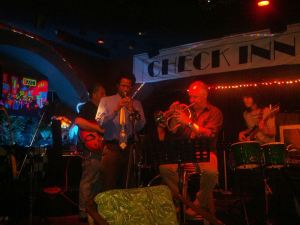 Steve Cannon and a talented group of jazz musicians at CheckInn99

Steve’s musical credits are too numerous to list in this post but a partial list includes: piano playing comedian Steve Allen, The Clarence “Gatemouth” Brown Big Band, Mary Wilson and the Supremes, The Temptations, The Four Tops, The Spinners, Frankie Valle and the Four Seasons, and the Fifth Dimension. He produced  his debut CD, NOWHERE MAN in 1999. His 2006 CD, the award winning release, FULL BLOWN by Steve Cannon and the Blow Hard Big Band was named “2006 Best Album of the Year” by “All About Jazz” Magazine. Steve is also among an elite group of jazz musicians that performed a command performance for His Majesty the King of Thailand. And anyone that lives in Thailand knows full well the high regard King Bhumibol has for jazz. The Jazzy King, as he has been referred to, once played side by side with Benny Goodman.

I love living in Bangkok, Thailand for many reasons. The diversity and talent of the expat community is just one. After two long stints in Los Angeles, CA and Portland, Oregon Steve Cannon now calls Bangkok his home. Steve can be found performing regularly with his piano playing brother, Randy Cannon at the internationally acclaimed “Living Room” jazz club in the Sheraton Grande Sukhumvit Hotel in Bangkok. I will seek out Steve and his brother’s band soon at that venue. 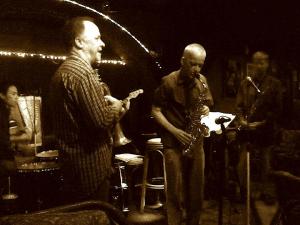 In the meantime, anyone that appreciates good jazz music and the somewhat limited options that exist in Bangkok should make a visit to the Jazz on Sukhumvit series on Sunday afternoon from 2:00 p.m. to 6:00 p.m. at CheckInn99. You never know when greatness decides to make an appearance.

One Response to “Sunday Afternoon Jazz at CheckInn99 on Sukhumvit Road …”