Five years ago, during Songkran celebrations, I hunkered down and created this blog, Thailand Footprint with the help of a cool cartoonist who drew the frog in a coconut shell. Web-traffic peaked in 2015 and 2016 at rather impressive but not Stickman-like numbers. For a blog that featured the arts, people, and literature of Thailand, I was pleased with the results. I still am. It’s now a body of work of sorts for AI anthropologists to look at, if they are intelligent enough to do so, long after I am gone.

To commemorate and celebrate the past five years I am also pleased to announce that I will have a new book coming out called Different Drummers. When Bangkok Beat was published almost three years ago I did a few interviews with fellow authors, Paul Brazill, Jame DiBiasio, and Thom Locke. When Joe my new tailor from India at Charlie’s Design Fashion House expressed interest in interviewing me I immediately thought, why not? The timing was right. It may have even been my idea. My memory is not what it used to be.

As an aside, for anyone looking for a good tailor shop in Bangkok, I highly recommend Charlie’s Design Fashion House on Sukhumvit 16, conveniently located directly across from Foodland. Joe and his staff are way cool. Check out their online reviews.

It’s not every author in Bangkok who gets interviewed by his tailor. I hope you enjoy the exchange. And thanks for reading Thailand Footprint over the years.

Joe from Charlie’s Design: We had the distinct pleasure of fitting up the rather large blogger and author, Kevin Cummings recently. Kevin has some interesting insights into the world of literature, fashion, shoes, and the City of Angels.

How long have you lived in Bangkok and where else have you found yourself over the years? What do you enjoy about living here?

On average I have lived in Bangkok for 75% of each year since 2001. Over the course of my lifetime I have circumnavigated Balboa Island in a dinghy, panned for gold in the creeks of Auburn, California, played hoops for Chico State and worked on Market Street in San Francisco. What I enjoy most about Bangkok is the anonymity. But now that that’s over I still enjoy the street food.

How did you hear about Charlie’s Design Fashion House?

Late last year I was listening to Billy Gibbons when my Bangkok 101 Magazine arrived. Inside I read an article, “The Sharp Dressed Man”.  I then did some research on Bangkok tailors. The clincher: I was impressed with your web-site design and your social media reviews, plus I’ve always liked the way Sukhumvit 16 buzzes while being tucked away from the other even and odd sois. 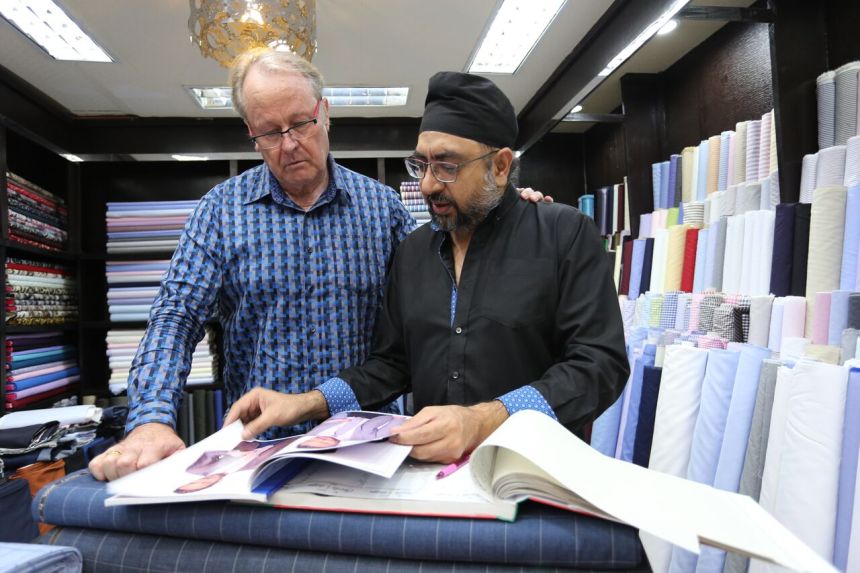 Kevin Cummings, author of Bangkok Beat and Different Drummers gets fashion advice from Joe at Charlie’s Fashion and Design located on Sukhumvit 16.

Your taste seems to have evolved since we first met you. What made you lose the Magnum P.I. look?

Peer pressure, mostly. They convinced me the 80s were over.

You have written about some of the more interesting creative people living in and visiting Thailand in your debut book ‘Bangkok Beat.’ How did you decide what material to write about?

I knew what I didn’t want to write about: Food, travel, conquests and Go Go bars. I wrote a book that I would find interesting, with the help of the best poet in Southeast Asia, John Gartland , Ace storyteller and historical fiction thriller writer, Thom Locke, and pro photographers Eric Nelson and Alasdair McLeod. The book will have been out three years this coming June. It has aged pretty well. 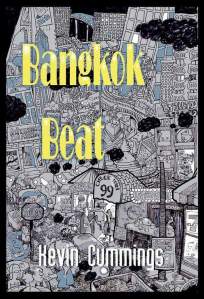 What writers were your early influencers?

Kurt Vonnegut, Ken Kesey, Philip Roth and Gary Trudeau. I like humor when it adds to the neurosis.

When did you first consider yourself a writer?

I don’t consider myself a writer. I like to write. The distinction is similar to a professional violinist and a country fiddler. Both pursuits are admirable and both are skill-sets. It’s not easy for the fiddler to make a living fiddling for one thing.

What do you like to wear when you write?

My Bangkok Soi Dog #1 T-shirt with art by Chris Coles. I have several.

What’s the one item of clothing that every man should have in his closet?

A good quality bathrobe, unmonogrammed, long enough to meet the knee while sitting. Charlie Rose would still have a job if he had only donned one.

Do you have any other books in you about Bangkok or other topics?

Yes. My publisher, Frog in the Mirror Press has prodded me along with a few fans of the first book to write a sequel. It will be out late summer of this year. John Gartland, Thom Locke, and Alasdair McLeod are once again on board. And I’ll purchase some Eric Nelson photos at our standard rate. Without their contributions I wouldn’t do it, simply because it wouldn’t be as fun or as good. The title is Different Drummers and the cover art is in the works. A manuscript is complete. The Tokyo Joe’s to Queen Bee story will be told, among others, and who wouldn’t want to read about that?

What writers living in Thailand do you admire?

Of the top tier writers, in addition to their writing abilities, I admire their doing. Joe Cummings, Jim Algie, Christopher G. Moore, Colin Cotterill, Jim Newport, Collin Piprell, John Fengler, John Burdett to name a handful, they all do. They all live. They skip hibernating season for the most part. They prepare for death far better than the average bear. That’s what I find most admirable about good writers.

Finally, you’ve lived an interesting life by some people’s standards. What’s next for you?

A linen blazer. After that, as my wife likes to say, we’ll have to wait and see.

All Photographs by Alasdair McLeod

9 Responses to “Joe the Tailor interviews me about Fashion and Different Drummers: Bangkok Beat Redux”

It’s not every author in Bangkok who gets interviewed by his tailor. I hope you enjoy the exchange. And thanks for reading Thailand Footprint over the years.