Muay Thai on the Brain 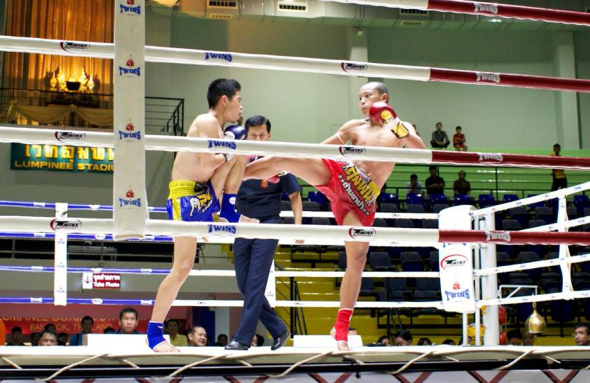 When news of the impending closure of Lumpinee Boxing Stadium on Rama IV Road was announced several months ago, Muay Thai fans around the world reeled in dismay.

Granted, the stadium was falling apart at the seams (the roof leaked in heavy rain and a cat famously fell through the ceiling into the ring during a show last year), but it represented a cultural landmark—the scene of some of the greatest fights in Muay Thai history since opening its doors in 1956.

However, as explained pragmatically by Major General Surakrai Jatumas (Chief of Lumpinee Stadium) in a video by the Bangkok Post, “Lumpinee Boxing Stadium’s land lease contract ended and changes happen.” The construction of a new Lumpinee Boxing Stadium had been underway in the grounds of the Royal Thai Army Sports Centre on…

I have split the last twenty years between Thailand and a small beach community in Northern California. I like to read. I like to creatively consume. Here I display a great deal about the artists, poets, novelists, musicians, photographers and the occasional muse who create in Thailand and SEA. Gope, the very cool and relaxed frog in the coconut shell was drawn by the very talented, cool and relaxed author / cartoonist, Colin Cotterill, to whom I am very grateful. I am, among other things, a blogger who has been published a few places thanks to the kindness of others. I am the author of Bangkok Beat, and in 2019 DIfferent Drummers, both published by Frog in the Mirror Press and on sale now as a paperback and eBook at Amazon, Barnes & Noble, Kobo and Apple iBooks among others. In the long run, John Maynard Keynes is going to be right. Happy reading.

The talented Mr. Pornthep Piriyasoranant comes for a visit with his latest artistic reproduction, Mask of Agamemnon. A reminder that we are all just here temporarily. Enjoy the ride .... #supportlocalartists
Dusk. #nofilter
Grilled salmon for breakfast. Because it's there ... #sundaybrunch
Saturday night meet up at Det 5 #det5
Coffee and Food time. #simplepleasures
You know it's your lucky day when you get the last of the chicken gizzards at 12:45 p.m.... #gizzards #lowexpectations #newyear
Happy New Year from Mick and me. #samesamebutdifferent
Christmas in Southeast Asia. Gotta love it .... #christmas2022
Art is where you find it. Traditional Christmas Day fare or the remains thereof ... #christmasday